I’ll never cease to be amazed at how threatened and upset people get at young folks with talent who don’t play the kiss-the-media’s-butt game. But there are certainly a lot of them who were happy to see Bryce Harper choked yesterday.

The latest: Lee Judge of the Kansas City Star. Who, while devoting a few sentences to Jonathan Papelbon being kinda wrong too and saying that, ultimately, both are to blame, writes the following under the headline “Should Jonathan Papelbon have choked Bryce Harper?” he writes:

I don’t know Bryce Harper from Adam, but he certainly seems like a young man who needs an attitude adjustment. Unfortunately he was choked by the wrong guy in the wrong place . . . if you want to choke Bryce Harper — and I suspect if you played with him, you might — ask him to come up the tunnel and then choke him. You don’t do it in the dugout for everyone in the world to see; you keep that stuff private.

That first sentence is actually a milder version of his original story. There he wrote: 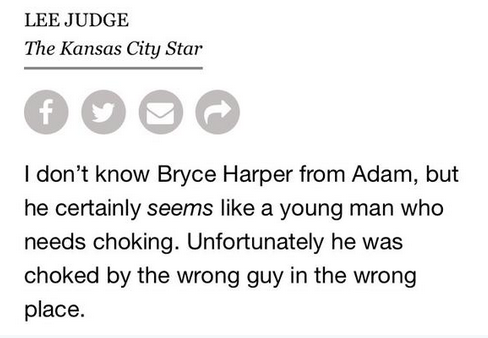 Points off for the aggression and for the improper “needs [verb]” construction, which I thought only was prevalent in Ohio and Pennsylvania, but which apparently extends much farther west.