Pirates 13, Rockies 7: The Pirates clinch a playoff spot behind Neil Walker‘s three-run homer and six RBI. Not that it was totally easy. The Pirates had a 7-1 lead, let the Rockies back in it and then put their foot down with a six-run ninth inning. Walker has been on the Pirates since 2009, by the way. In 2010, his first full season, they lost 105 games. Andrew McCutchen, Pedro Alvarez and last night’s starter Charlie Morton were on that team as well. Seems ages ago, however.

Orioles 4, Nationals 3: Manny Machado hit a two-run home run with two outs in the seventh and then Jonathan Papelbon hit Machado with a pitch in the ninth after throwing one up and in to him. Papelbon was ejected and after the game Machado called him a “coward.” I’m not sure if that’s literally correct — we tend to use “coward” as a synonym for “jackass” and other, more pithy words in that family of nouns, and that seems weird to me — but I get what Machado is saying and agree with him. Bryce Harper seems to agree as well, calling it “pretty tired” and lamenting the fact that he’ll probably get hit in today’s game. He even said “somebody” hit Machado, not using Papelbon’s name, which is a pretty classic baseball way of throwing shade on a guy. So, yeah, things are going great in the Nationals’ clubhouse, I’m sure.

Braves 6, Mets 3: Freddie Freeman, like Dante, wasn’t even supposed to be here today. But like Dante, he buckled down and did his job, driving in five runs after entering the game as a pinch hitter in the seventh inning, totally stunning the Mets. Freeman has always hit the Mets well, but I’d like to think this is him upping his game to Chipper-versus-the-Mets levels. Mostly because very little makes me giggle more than seeing Mets fans suffer derangement syndrome over a given Braves hitter at any given time. I mean, the Nats lost, the Mets are pretty clearly winning the division and the Braves are a total tire fire at the moment, but from the looks of my timeline last night Mets fans are reaching for the antidepressants. Really, the Mets need to either win every single playoff game in which they appear by five runs this postseason or else they need to be eliminated quickly, because I don’t think their fans can handle the drama otherwise.

Padres 5, Giants 4: Bruce Bochy may be the best manager alive and all of that, but he ought to be tarred and feathered for this: 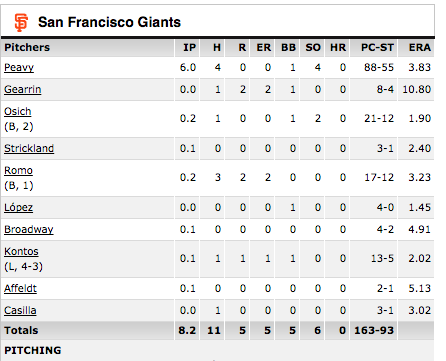 Seriously, we need to do something about expanded rosters.

Angels 6, Astros 5: Things are getting tight. The Angels rallied in a three-run eighth inning thanks in part to a David Freese two-run double and took two of three from the Astros in this series. They’re now only one and a half back of Houston — the Twins are just a game back — and the Astros are looking up three games at the Rangers. Can a team go from most surprising to most disappointing in the space of a couple of months?

Tigers 7, White Sox 4: There was a time when Justin Verlander would sit mid-90s all game and then, in the late innings, crank it up to the high 90s. Not a ton of pitchers do that and Verlander himself hasn’t been able to for a couple of years. But he did it yesterday, hitting 99 on the gun in the seventh inning en route to his fourth win of the season. Verlander’s reemergence may be the only positive thing happening with the Tigers in the second half but it’s an absolutely essential thing if the Tigers are to return to competitiveness in the next couple of years.

Blue Jays 4, Yankees 0: Now witness the firepower of this fully armed and operational Marcus Stroman! I guess we’ve seen that for a few games now, but if seven shutout innings or something quite like it is what we’re gonna get from him on the regular, well, look out everyone else in the playoffs.

Rays 6, Red Sox 2: Drew Smyly pitched shutout ball into the seventh, Steven Souza had four hits and Asdrubal Cabrera had three. This game was brought to you by “dudes who, if you weren’t paying that much attention, you coulda swore played for other teams.” And FanDuel.

Marlins 4, Phillies 3: Dee Gordon hit an RBI double with two outs in the bottom of the 11th inning to walk it off for the Marlins. Which is sort of surprising to me because I was assured that the Geneva Convention had outlawed extra innings games between teams like the Marlins and Phillies in late September as some sort of crime against humanity.

Brewers 4, Cubs 1: The Brewers had a nine-game losing streak to the Cubs but they snapped it here. Curse of the cheetah, probably.

Royals 4, Mariners 3: Lorenzo Cain singled home the winning run in the bottom of the 10th inning, reducing the Royals magic number to two. Twins loss, Royals win and it’s over in the AL Central. After the game, Cain said “Champagne tomorrow, that would be nice.” I’d like to think he said that with no knowledge whatsoever of the magic number situation, however. Because it’s always a true sentiment.

Twins 4, Indians 2: Phil Hughes lost his job in the Twins rotation but was back last night and he pitched five scoreless innings, beating Corey Kluber and the Tribe. Paul Molitor said after the game that “those were the biggest five zeros” Hughes has had all year. I can only assume that means Hughes’ fantasy team didn’t have some combination of the Phillies and Tigers rotation in it.

Cardinals 10, Reds 2: Matt Carpenter homered twice and the Cardinals won their 96th game of the year. Pretty darn good chance they’ll be the first 100-win team since the 2011 Phillies. Not that I wanna jinx ’em with that awful comp, however.

Dodgers 4, Diamondbacks 1: Chase Utley played the hero, hitting a leadoff homer and doubling in Jimmy Rollins in the eighth which gave the 2008 Phillies the lead. My computer crashed as I was looking at the box score so I can’t be sure, but I think Brad Lidge closed this one out.

Rangers 10, Athletics 3: Elvis Andrus and Adrian Beltre each drove in three runs — each on a three-run homer — and Colby Lewis won his 17th as the Rangers maintain their three-game lead in the West. At some point we’re all gonna have to sit down and talk about how the Rangers pulled this off.