I was 100% sincere with my earlier obit about Yogi Berra. Go read that if you’re looking for something without snark. But I do have a snark quota to meet today, so that’s why this post is here. Anyway:

If you’ve been reading this blog for any amount of time you know that we don’t have much reverence for the so-called Golden Era. Only one of us writing here is anything approaching old and none of us were alive when Mickey Mantle was active, so that’s probably to be expected.

Oh, sure, it was cool. All baseball eras are cool in their own way. There were great players, teams and games between the 20s and 60s. But there are great players in every era. It’s just that, unlike the Golden Era people, fans and proponents of eras that either followed or preceded the Golden Era aren’t so hellbent on claiming that baseball was never better than it was when one team won the dang World Series every year, teams weren’t integrated until the tail end of it and big slow dudes played boring station-to-station baseball dominated as Golden Era fans are.

It’s OK, though, Baby Boomers like a lot of things that would be considered super lame if not for the strength of their numbers and the fact that they’ve controlled the media for the past 40 years. Let us let them have their blind spots in this regard. As they tell us about how the grass was greener, the balls were whiter and the crack of the bat was louder in 1956 we will all just nod and realize that these are the same people who think a derivative schmaltzsmith like Eric Clapton is a god of some sort. Aesthetic judgments are not their strong suit.

But let us not allow them to claim Yogi Berra for themselves. Yes, his legend was built in the 40s and 50s and his career wound down just before the Beatles hit America and that makes him one of the most Golden Era players ever. But he didn’t just walk into some lame cornfield the moment the world got weird and more interesting and wool and fresh grass made way for doubleknit polyester and astroturf. Berra kept doing the do well into baseball’s strangest couple of decades.

And the best evidence of this is here. In this picture, in which Yogi Berra, wearing an Astros uniform while standing on fake grass in a domed stadium accepted a picture of himself in a Mets uniform he donned while featuring some groovy sideburns. And, to top it off, the man presenting it to him is an Expos legend: 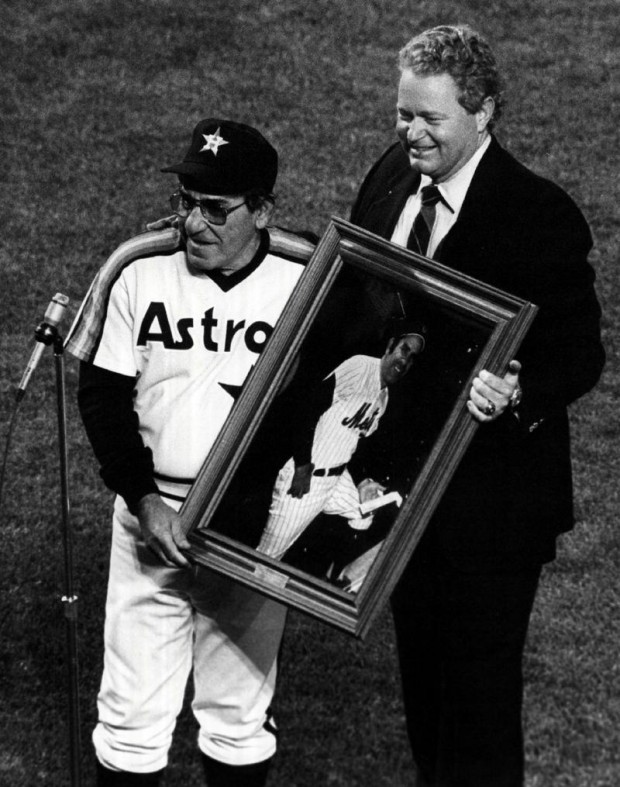 It was a photo taken in 1986, so the weirdness of America had receded and we were starting our long sad walk back toward boring traditionalism, but there are fewer things in the world less Golden Era than this photo. The only thing that would make it less Golden Era is Dock Ellis scraping the pigments off of the Mets-Berra photo, drying them in the sun and then smoking them while wearing hair curlers and listening to Funkadelic’s “Free Your Mind . . . And Your Ass Will Follow.” On 8-track.

Man, I wish that had happened.

Anyway, I have no idea what Yogi Berra thought of the world after 1965 or so. If he was like my similarly-aged grandfather he may not have cared much for it. But he rolled with the changes as far as baseball went. And even if he or the purists didn’t much care for the changes, everyone gets to claim Berra to some extent.

When his name is mentioned I will always first think of him jumping into Don Larsen’s arms or arguing with the ump after Jackie Robinson stole home, but I will always keep part of my Berra-Space free for him coaching the gosh darn Houston Astros.