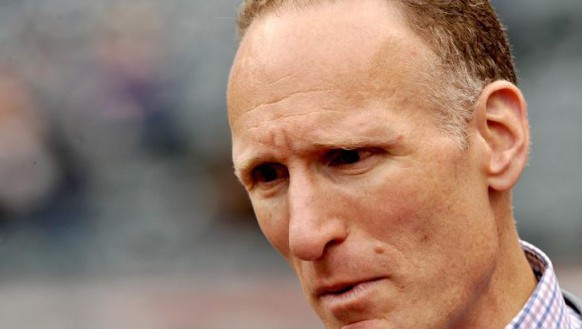 The Blue Jays won’t have a press conference or an official statement from Mark Shapiro until after the season because they don’t want to distract from the playoff push. But this morning the Indians and Shapiro made it official from their end of things, with each party releasing a statement about Shapiro moving on:

Through my twenty four years as part of the Cleveland Indians, I have developed a deep emotional and civic attachment to the Indians organization and the Cleveland community.  The root of those ties is in the personal relationships that my family and I have built.  While weighing those bonds carefully and seriously, I feel the unique and compelling nature of the Blue Jays President/CEO position warranted my consideration.  This position represents a unique opportunity for me and one that I felt was the right new challenge to undertake.  With mixed emotions, I will assume the Toronto Blue Jays CEO position upon the conclusion of the 2015 season.  As the Indians organization moves forward, I am confident the current leadership represents a strong foundation to field a championship caliber team moving forward.  The relationships we have enjoyed here will be lifelong bonds and will ensure that I will always be a fan of the city of Cleveland and the Cleveland Indians organization.

Given the person that Mark is, the significant leadership and values that he has brought to the organization and with everything he has helped us accomplish, it will be extremely difficult to see him leave. However, I hope that this new challenge brings happiness and fulfillment for Mark and his family.  As we move forward, I will not be seeking an external replacement for Mark and will continue to rely on the existing strong leadership group to guide us forward.  Mark and I are confident that moving forward through this transition, we have a very strong foundation in place to build championship level success on and off the field.

Dolan not seeking a new President to replace Shapiro and, instead, taking over Shapiro’s duties himself is a good way to save a few bucks at least, right?