Yesterday was the 70th anniversary of the bombing of Hiroshima. In remembrance of 8/6/45, the Hiroshima Carp all wore number 86 before their game against the Hanshin Tigers. The uniform had the words “PEACE” on the chest and “HIROSHIMA” on the back. 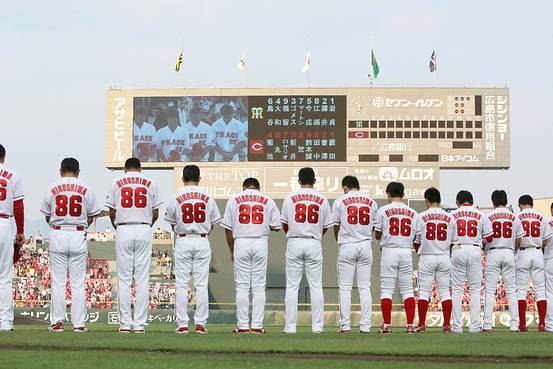 Read this, from the Japan Times, in which former Carp player Kazuyoshi Yamamoto, whose father was injured in the bombing, talks about the connection between the Carp and the city;

Read this, from the Wall Street Journal about both last night’s game and about how, for younger citizens of Hiroshima, the facts of the bombing have become fuzzy as those with living memory of it and its aftermath have passed on; finally

If you have never read it before, and maybe even if you have, read John Hersey’s masterwork “Hiroshima,” which he wrote in the year following the bombing, providing a minute-by-minute and day-by-day account of the bombing and its aftermath through the eyes of six of its survivors. Yes, it’s long, but if all you have ever read of the bombing of Hiroshima are marco-level details of the explosion or things from the American perspective, it will be well worth your time.