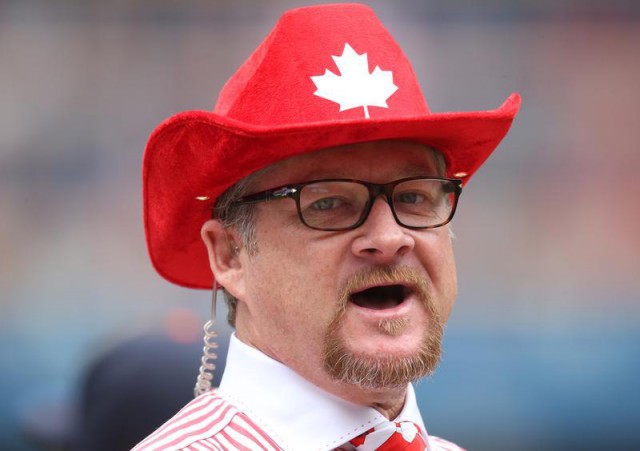 In the wake of that Jose Bautista-Yordano Ventura Twitter beef, former catcher and Blue Jays analyst Gregg Zaun — who, last we heard from him was arguing in favor of hazing and abusing young players — delivered a verbal open letter to Yordano Ventura before yesterday’s Blue Jays-Twins game. The transcript:

“Dear Yordano Venutra. Are you seriously running your mouth? You don’t even have 3 years of uninterrupted service time. The only reason you’re even in the show right now is because Jason Vargas blew out.

“They sent you back to the semi-pros because you were stinking up the place. You weigh about a buck twenty five and should probably be watching your back.

“Jose Bautista is a 6 time all-star with 269 lifetime homers and 12 years of service time. Hardly a nobody. Show some respect and stop writing checks with your mouth that your skinny ass can’t cash. Especially from the safety of your team bus as you exit town with your tail between your legs? Don’t puff your chest out and challenge a grown man via Twitter, and then erase the tweets. Go knock on the Jays clubhouse door and do it like a man if you feel that strongly.

“Stop acting like Tommy-Tough Guy while hiding behind the internet and a dozen teammates. Stop running your mouth kid. We all know what you’re about, there’s no confusion there. You’re the guy who throws 100 mile an hour fastballs at guys when you know you don’t have to hit, or face the Jays again in the regular season. Grab a bat and man up. Otherwise shut up.

“Sincerley yours, The Manalyist. Section 134, at the Rogers Center in case you’re wondering where I’ll be.”

In other Zaun news, he was on “The Drive with Danny & CDot” on 610 AM in Kansas City today. Towards the end of the interview, the hosts asked him if the Blue Jays stole signs, which was the gist of Ventura’s complaints. His response: the Blue Jays stole signs when he played for them, that if you’re a pitcher and you’re  too dumb to not hide your signs you deserve to get them stolen, and that A-Rod was the best sign-stealer he’s ever seen.

So I guess he was more angry with Ventura over tone than content. Fun times.

The 31-year-old free agent was a relief pitcher for the Boston Red Sox in the 2022 season, with a 3.83 ERA in 50 appearances, striking out 52, giving up 17 walks and allowing just five home runs.

Strahm has been a reliever and a starter over his seven seasons in the MLB, playing for Kansas City and San Diego before landing in Boston.

The Phillies did not say how much Strahm’s deal was worth in the news release.

After falling short in the World Series to the Houston Astros, Philadelphia has been on an offseason spending spree, picking up shortstop Trea Turner and right-handed starter Taijuan Walker.