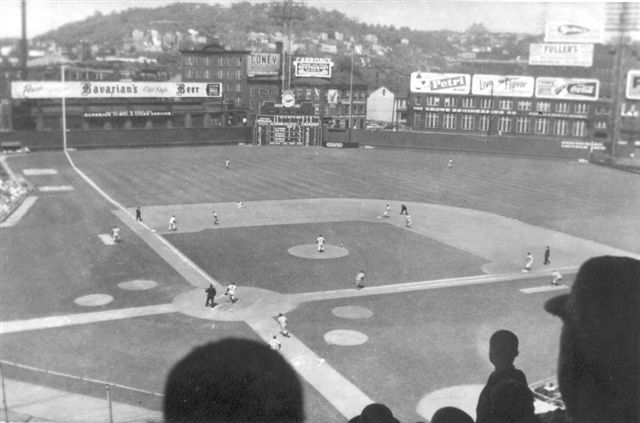 CINCINNATI — It was 90 degrees with awful humidity before noon here today, so it was a perfectly fine day for a six mile walk. But not just any stroll. A quest! A quest to see the site of old Crosley Field, the home of the Cincinnati Reds from 1912 until 1970.

Crosley Field was known as Redland Field Until 1934, when it was renamed for Powell Crosley, Jr., who bought the Reds that year and owned them until his death in 1961. Seems a bit presumptuous, but that was what was done back then. Ask the folks who used to go to Navin Field, Briggs Stadium and the folks who still go to Wrigley. If it had occurred to those old owners that they could sell the rights to name their parks then like we do now, they would’ve done it too. Someone would’ve played in Burma Shave Ballpark, I suspect.

And it’s not like Redland Park had some long rich history behind it that was being violated by the name. Indeed, there had been seven other ballparks in Cincinnati before it was built in 1912. The Union Grounds housed the original Red Stockings. That only lasted three years. Then the Avenue Grounds for four years. The Bank Street Grounds off and on between 1880-84. First one place called League Park, then East End Park and then another place called League Park, but not the same as the first. There was a third League Park at some point as well. In the last nine years before Crosley came along, the Reds played in a place called The Palace of Fans. Which was legally called League Park as well — the fourth! — but not the same League Park as the others. We make fun of the Braves leaving Turner Field now — and we are right to do so — but back then ballparks were basically disposable.

Finally to Redland Field/Crosley, where the Reds played for 58 years.

Crosley wasn’t as venerable and historic as some of its contemporaries like Fenway Park, Tiger Stadium, Ebbets Field and Wrigley Field, but it was part of the same basic building boom of the first couple of decades of the 20th Century in which brick and steel replaced those disposable old wooden parks. And there were many good times there, to be sure. Four World Series were played there — 1919, 1939, 1940 and 1961 — and it was home to the World Series Champion Reds in 1919 and 1940. There were two All-Star Games played there, one in 1938 and one in 1953. Many Hall of Famers called it their home park.

But by the late 1960s, the writing was on the wall for Crosley. The neighborhood surrounding the park in Cincinnati’s West End was in decline. Parking was a problem. Capacity was small and, as the newer parks of the 1960s showed, there was a LOT more money to be made in a modern facility. The last game in Crosley took place on June 24, 1970. The Reds beat the Giants, 5-4. This was the scene: 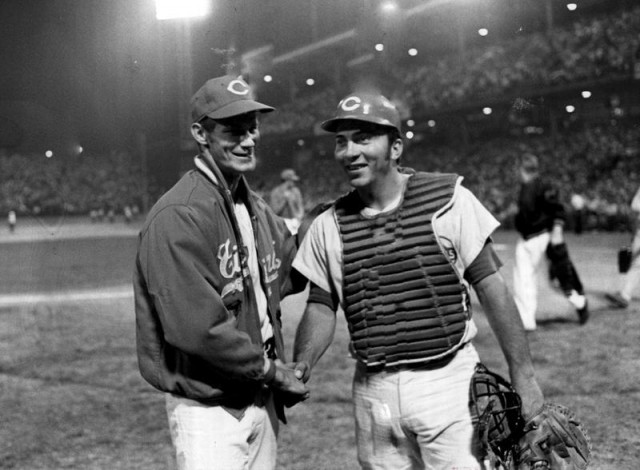 Riverfront was ready by then and the Reds played their next home game there six days later. Riverfront, touted as state-of-the-art and described as a beautiful marvel and something close to baseball perfection, would last 25 fewer years than Crosley ever did and would be not be missed for even a second.

Like a lot of those old parks, Crosley did not get a particularly dignified end. For a year or so it was used for concerts and dirt bike races. Eventually, and quite ironically given the parking problems which led to its end as a viable ballpark, it became a police impound lot, with hundreds of cars parked in the infield and outfield. In 1972 the wrecking ball came. In 1976 this single story office building, home to a business called Phillips Supply Company, opened: 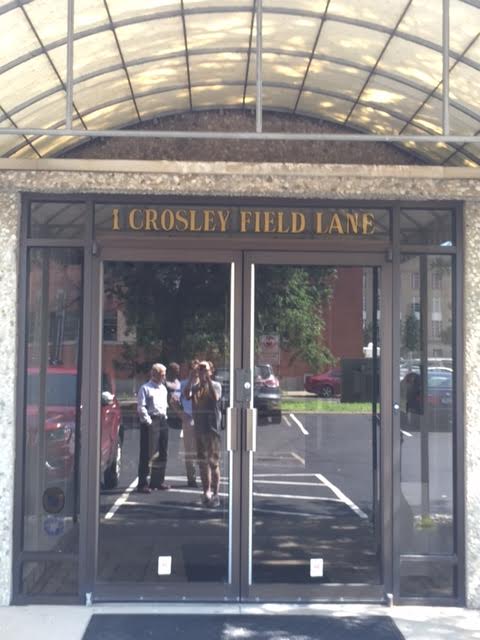 The fellow in the reflection there is named Courtney, and he has worked at Phillips “for a loooong time,” to use his words. He saw us hanging around outside looking around and, no doubt used to baseball geek gawkers, happily showed us what little there was to show us of the site. 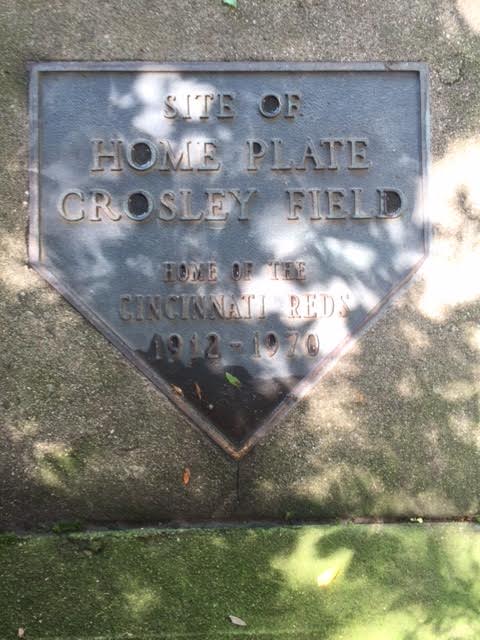 This is actually a lie. It is not, and cannot possibly be, the site of home plate. A simple look at an old photo or a map of Crosley would show this, as it’s way too far west down Findlay Street. It’s worth noting that this plaque sits right in front of the Phillips Supply Company, conveniently next to the door in a nice place in the landscaping. My guess is that the people who built it back in 1976 put it there on an “eh, it’s close enough” basis, so that it could be seen by visitors. 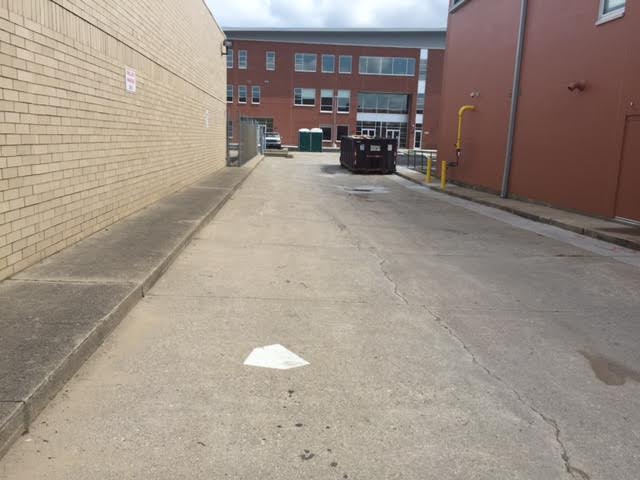 That’s an alley just to the east. It’s correct, as well. I’m told that if you can get inside that building to the right that they have second base marked, but no one was around to let us in.

The folks at Phillips Supply are doing what they can to keep memories of Crosley Field alive. The street address for one, which isn’t a real street as much as it is an address designed to hold on to that bit of history. Courtney let us inside, and showed us a number of framed pictures they have of the site. Some of games, some of the great 1937 Ohio River Flood that actually put the diamond of Crosley underwater. Many of the site’s demolition and, eventually, the construction of their current building. We weren’t nearly as nostalgic a society when that happened as we are now and it would’ve been understandable for such a thing to go wholly undocumented, so you have to give the Phillips folks some sort of credit for documenting what they did.

They have this too: 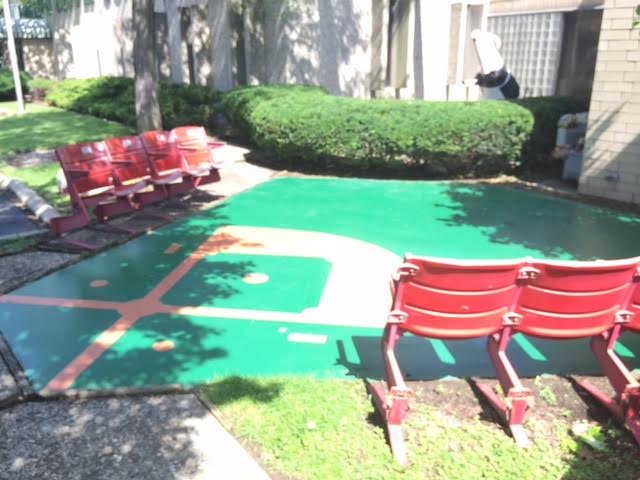 There used to be Crosley Field seats and a mockup background of Crosley Field, but someone stole them. These are seats from Riverfront Stadium. Courtney told us that Phillips Supply found some more Crosley seats and are having them refurbished, but they’ll be keeping them in the lobby, not outside. Probably a smart move. It’s still not a great neighborhood, and memorabilia hunters are even worse than common thieves in some respects.

So that’s all there is of Crosley Field. The place where Johnny Bench, Pete Rose, Frank Robinson, Vada Pinson, Tony Perez, Bucky Walters, Ernie Lombardi, Heine Groh and all of the stars of the National League for over half a century plied their trade. It used to be a ballpark. Now it’s all but gone.

But such is the way of these things, ya know?

Thanks to Sharon — the All-Star volunteer who showed up after we talked to Courtney, handed out some Crosley literature and whose last name I did not get — for assisting with this article. And thanks to Rob Neyer for making me get my lazy butt out of bed this morning to walk over to Crosley with him.