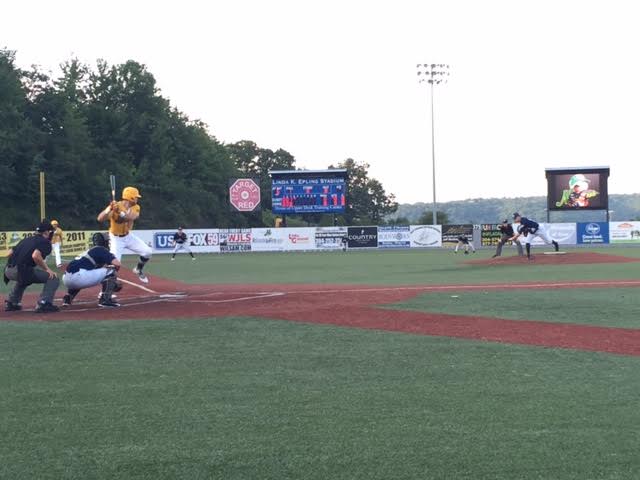 BECKLEY, WV — On Saturday I drove down to this southern West Virginia town for some hiking and sightseeing with Fox’s Rob Neyer. Rob had never been to West Virginia, and since he, like me, was on his way to Cincinnati for the All-Star Game, it was a good opportunity for him to pick up his 46th state before the festivities began. For me it was a chance to visit the town where I grew up. I don’t have family here anymore, but Beckley was and always will be my home.

While heading back toward town after a day of hiking and exploring the New River Gorge, we spotted a sign for the West Virginia Miners baseball team. I had totally forgotten about the Miners. Or, rather, I had never experienced them. Beckley didn’t have a baseball team when I lived there. The Miners, members of the Prospect League, which is a collegiate summer wood bat league, began play in 2010. We decided to call an audible on our evening plans and head to Linda K. Epling stadium for the Miners’ game against the Butler Blue Sox.

Epling. That name was familiar to me. I went to high school with a kid named Matt Epling. I wondered if there was any relation. After perusing the team’s program I learned that relations have everything to do with the West Virginia Miners:

Not officially on the team staff page, but listed in the program was Matt Epling, my friend from high school, who among his many other pursuits, is Director of Entertainment and Media for the Miners. The program credits him with “inventing the concept” of Miner Mike. This is Miner Mike: 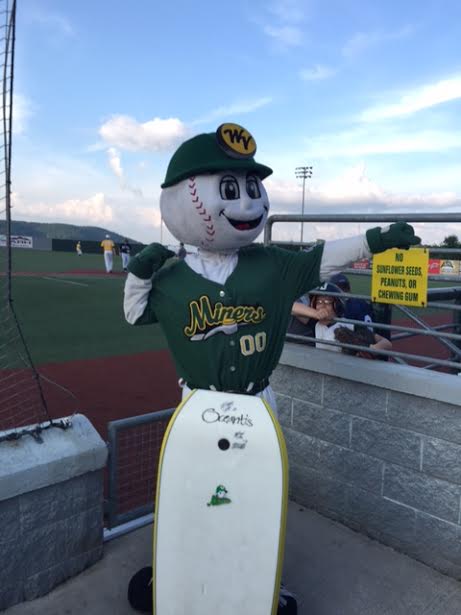 I feel like Mr. Met should get co-credit for the invention of this concept, but we’ll leave that lie for now.

The Miners also have an unofficial mascot, though I suppose he’s more of a Super Fan: 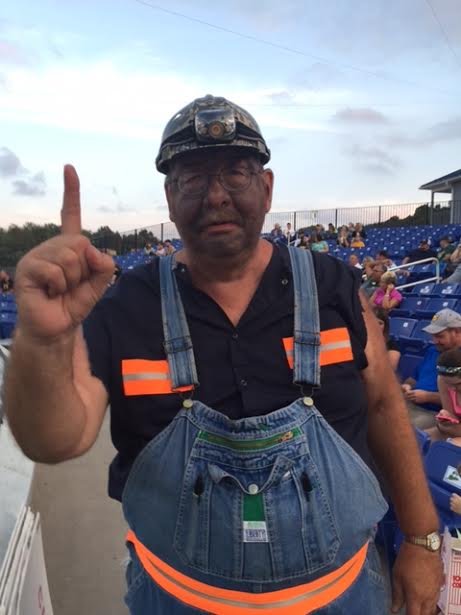 He led chants, held up signs and heckled the umps from right behind home plate.

He wasn’t the only entertainment, however. In the bottom of the fourth, Miners players Jesus Vilalobos and Ray Lopez led off with back-to-back singles. One of the most notable differences between Prospect League Baseball and major league or even affiliated minor league baseball was just how bad the baserunning decisions were. There were many, many pickoffs in this game, and Vilalobos was one of them. As he was being picked off in between second and third, Lopez broke for second and was thrown out trying to steal. From where I was sitting he looked to be clearly out. Fans around me, even though they were Miners partisans, agreed. But manager Tim Epling didn’t. He went out and argued.

The beauty of a Prospect League game, attended by, say, 500 people, is that you can hear every word of an argument going on at second base. Particularly the F-bombs and then the “you’re outta here!” of the umpire’s ejection. Not that that stopped Epling. He more than got his money’s worth. Then he walked back toward the dugout. Then he came back and got more of his money’s worth. Then he left the field and stood right behind the dugout on the concourse with his arms folded. Then the ump came over and told him to leave and they began arguing again.

As this third act of the argument unfolded, owner Doug Epling — a vigorous man for his age, clad in a Miners polo shirt, tucked into his Levis and sporting gleaming white New Balance sneakers on his feet, came marching over to join in the argument. As this is a family blog I will not repeat the verbiage, but know my readers, that the Eplings were not pleased and there was some talk about the umpire’s deportment. The umpire, it should be noted, appeared to be approximately 23-years-old. As manager Tim carried on the argument, Doug texted on his iPhone with purpose, presumably to the league office to let them know EXACTLY what he thought about the state of the umpiring in the Prospect League.

The game resumed with manager Tim Epling now gone. Until he returned to the dugout to confer with acting manager Gary Epling. While wearing a different jersey, seemingly trying to pull a Bobby Valentine-in-a-mustache trick on the umpires and re-insert himself into the game. This was quickly discovered by the umpire and Tim Epling soon left again. A few minutes later he reappeared on the concourse, freshly showered and in street clothes as fans and friends came up to him to tell him just how good a job he was doing and just how screwed he was to be ejected like that. Doug Epling had many similar conversations, punctuated with a lot phrases like “never in my time . . .” and “. . . theres just no excuse. . .”

You’d think it’s something they’re used to by now. According to the Beckley Register-Herald, there have been seven ejections of Miners players and coaches in their first 37 games, with Epling being run three times. This is rather a lot for the Prospect League, the Register-Herald reports. The Miners win a lot — they are already two-time league champions and currently sit atop the Eastern Division by a comfortable three games — but there seems to be a touch of the redass on this roster.

As the sun went down and the cool mountain air I miss so much moved in, my mind began to wander away from the game. I began to imagine that the Miners — and, specifically, Doug and Tim Epling — were some hilarious cross between Boss Hogg and Roscoe P. Coltrane on the one hand and Buford T. Justice and Junior on the other. This is totally and patently a false characterization, by the way, as my memory of the Epling family from high school and their deportment here in no way made them out to be bumpkins or even comical in any way.

Indeed, they’re a successful family. Tim runs a baseball academy for kids. The bible verse quotations carved into the outside wall of the stadium and a recent interview of Doug Epling I found reveal them to be well-meaning, good hearted people who want nothing more than to bring baseball and fun to the people of Beckley and to make sure Linda K. Epling Stadium is a family friendly ballpark. And they seem to have wildly succeeded in this respect. 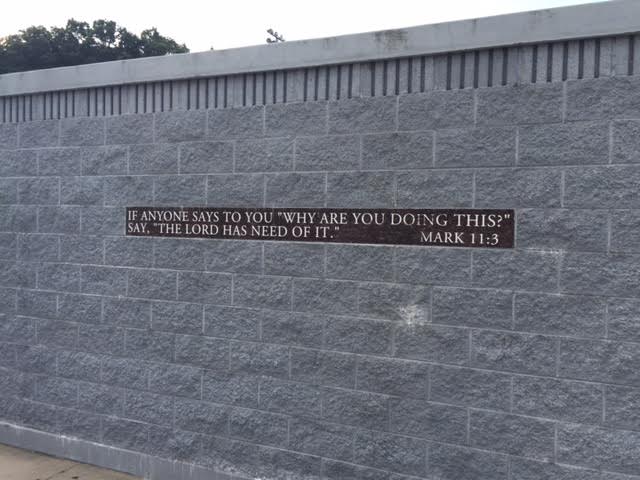 Still, when I fictionalize these folks in my, I dunno, fifth novel one day, there will be a scene like this:

Tim Epling: DADDY! Did you hear that, Daddy?! The umpire ejected me, Daddy!

Doug Epling: Oh no he didnt, OH NO HE DIDN’T! Because NO MAN is gonna eject MY BOY in Linda J. Epling Stadium or MY NAME isn’t DOUGLAS M. EPLING!

I so want that to be true, even if it bears no relation at all to reality.

In reality, I had a fantastic time at the Miners game. The ballpark, while unadorned by anything other than those bible verses, was pleasant enough. My seats, first row, just to the first base side of home plate, cost $8.50. They don’t sell beer (see the above-linked interview in which Doug Epling emphasizes the family atmosphere) and they also have signs all over the place telling fans that peanuts and sunflower seeds are prohibited, probably because they’re a couple of Eplings short of a cleanup crew to handle all that mess. Also, in a first for me, the seventh inning stretch was led off by the crowd doing the Pledge of Allegiance. That segued into “Take me out to the Ballgame,” which still had the “peanuts and Cracker Jack” line in it even if you can’t eat peanuts at Linda K. Epling stadium.

So, yes, there was some weirdness to it all. And I still have a hard time coming to grips with the fact that my little home town, which is NOT a baseball hotbed by any stretch of the imagination, has a baseball team. But that stuff aside it was a grand time. and a great excuse to go back to Beckley again and enjoy the experience that would not be possible without the Epling family. 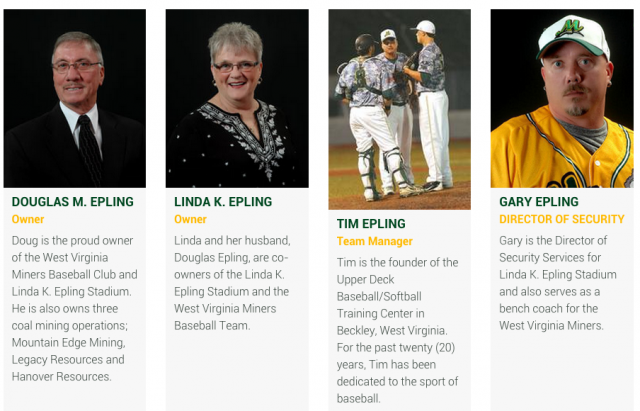 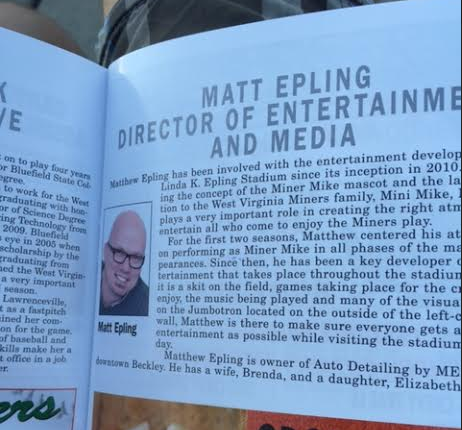