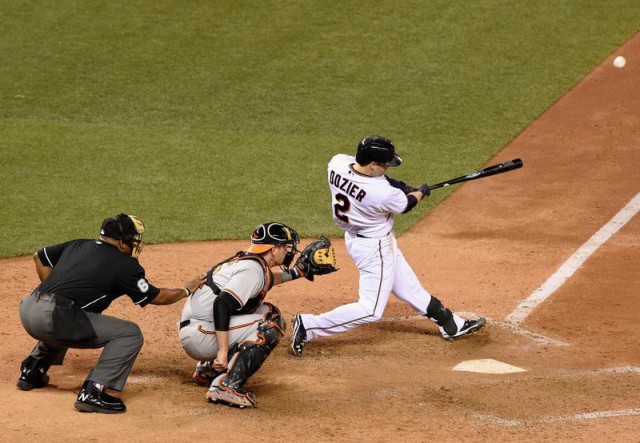 Twins 4, Orioles 2: Brian Dozier wasn’t selected for the All-Star team because the format we have no encourages managers to treat it like some cross between Little League in which everyone must be represented and some form of awful FutureBall in which every team has 20 or so relievers hanging around because people, the theory goes, would rather see relievers instead of genuine ballplayers who do things like slug .500 in the first half. Well, he showed them by hitting a two-run walkoff homer in the 10th. And he’ll show them more when he goes to Cabo or someplace better than Cincinnati next week with his days off.

White Sox 4, Blue Jays 2: Chris Sale’s 10 strikeout streak came to an end — he only punched out six — but that’s OK. He just needed to relax, all right? And not try to strike everybody out. Strikeouts are boring! Besides that, they’re fascist. He needed to throw some ground balls – it’s more democratic. Besides, by not striking everyone out he went the distance in this one.

Pirates 2, Padres 1: Pedro Alvarez hit a walkoff RBI single. Which is fun because the opposing manager, Pat Murphy, is his father in law. Which is exactly the plot of that Pauley Shore movie. You know the one: “BioDome.” I dunno, maybe “Son-in-Law” is closer to all of this, but I’m the wrong guy to ask. If that’s on I just mute it and watch Carla Gugino’s scenes.

Reds 3, Nationals 2: Reds shortstop Eugenio Suarez went 3 for 4 with two RBI including a tiebreaking homer. Suarez is batting .329 with three homers and 13 RBI in 21 games while filling in for the injured Zack Cosart. Otherwise a boring game it seems, at least from the box score, but it’s Cueto vs. Scherzer tonight making that seem like the game to watch.

Astros 9, Indians 4: The Astros offense just doing its Astros offense thing: Preston Tucker had four hits and an RBI. Jose Altuve, extended his hitting streak to 14-games with two hits, including an RBI double. Marwin Gonzalez homered and drove in two runs. Colby Rasmus drove in two. All of this despite facing Carlos Carrasco, who came a strike away from a no-hitter in his last outing.

Cardinals 6, Cubs 0: John Lackey tossed seven shutout innings, but you figure he’s going to be fined for giving up a hit to Jon Lester. It was Lester’s first hit in 67 career at bats. Came on a 95 m.p.h. fastball too:

Sure, it would’ve likely been an out or a fielder’s choice or whatever had it not hit Jon Lackey’s foot, but it still counts, man.

Braves 5, Brewers 3: Matt Wisler allowed three runs and seven hits while pitching into the sixth inning to help end the Brewers’ eight-game winning streak. Seven of those eight wins came against the Reds and Phillies so it wasn’t a Winning Streak For The Ages, but still. Bad scene in this one: a woman sitting behind the dugout was hit with a foul ball and taken out on a stretcher. More netting, Major League Baseball. Please, more netting.

Tigers 12, Mariners 5: The Tigers’ pitching may be a grease fire, but their offense is doing just fine. Nineteen hits here, including four from Victor Martinez and four from J.D. Martinez, who also drove in four runs. That made Hisashi Iwakuma’s first game back since late April less-than-fun. The Mariners starter gave up five runs on eight hits before turning it over to the pen, which didn’t fare much better.

Dodgers 10, Phillies 7: A four-hour and thirteen minute nine inning game which involved blown leads and bad pitching. It’s the Dodgers and Phillies wanted to party like it was 1999. Jimmy Rollins 2-for-4 and drove in the go-ahead runs in his first game against the Phillies since being traded away last December.

Mets 3, Giants 0: The Giants have lost seven in a row now, this one coming against Jon Niese, who tossed eight shutout innings. It was scoreless until the ninth when Johnny Monell, who had eight plate appearances for the Giants two years ago, hit a two-run double.

Rays vs. Royals: POSTPONED: Nothin’ lasts forever
And we both know hearts can change
And it’s hard to hold a candle
In the cold November rain