I get and read a lot of baseball books, but one which I have been looking forward to just arrived in my mailbox. It’s Molly Knight’s book about the Los Angeles Dodgers, “The Best Team Money Can Buy,” which chronicles the journey of the Dodgers from McCourt bankruptcy to, well, wherever it is they are today. Mattingly, Kershaw, Magic Johnson and all of the craziness of the past couple of years. It goes on sale July 14.

At the forefront of the craziness is Yasiel Puig, of course. Having just gotten the book an hour ago I haven’t read it yet, but if the index and my skimming around is any guide, he’s the main character. Heck, reading his index entry alone is fantastic. “Anger issues of” “chronic tardiness of” “brawls, and” “in brushes with the law””discipline issues of” “entourage of” etc. etc. Heck, I’ll just take a pic of it and show you. It takes up two whole columns: 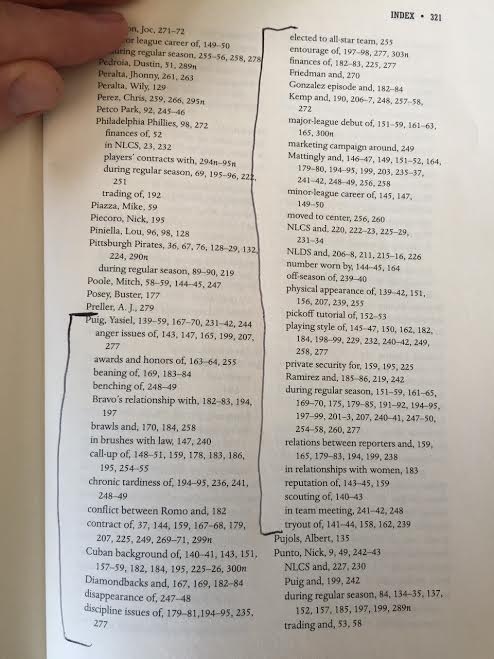 I have skimmed over a good many of the individual anecdotes and, so far, it seems like Knight gives a pretty fair treatment of Puig. While there is some indication that he has settled down this season, in 2013 and 2014, Puig was a pretty big pain in the butt. Maybe not the team-killing, literally life-threatening monster the Bill Plaschkes of the world make him out to be, but definitely someone who gets on his teammates and his coaches nerves (and the media’s too, but who cares about them?). At times he’s naive, at times he’s calculating. At times he’s surly. At times he’s misunderstood. At other times he’s simply oblivious. It’s understandable why he rubs people the wrong way, even if the accounts of him rubbing people the wrong way are often blown out of proportion.

But so far I have a favorite anecdote. And it has nothing to do with Puig. It has to do with a team meeting held as the Dodgers stumbled just prior to clinching the NL West in 2013. Don Mattingly called the meeting and told his charges to loosen up. Then, in an unprecedented move, because he never speaks out like this, Zack Greinke stood up. “I’ve got something to say,” he said. The room was quiet.

“Some of you guys have been doing the number two and not washing your hands. It’s not good. I noticed it even happening earlier today. So if you guys could just be better about it, that would be great.”

Greinke sat down. The team wasn’t sure if he was serious. When they realized he was, they laughed. Then they took the field, far looser than they had been, and went out and beat the Dbacks. Two days later they clinched the division and jumped in the Dbacks pool.

Did I mention that I love Zack Greinke?

And, so far anyway, I love this book. Check it out. It goes on sale July 14, and can be preordered now.