Dillion Gee has allowed 29 runs in 40 innings this season, missed time with a groin injury, makes a lot of money and the Mets have a lot of better options. As such, his being designated for assignment makes all kinds of baseball sense.

Of course, some folks like to interpret the news in ways they better understand: 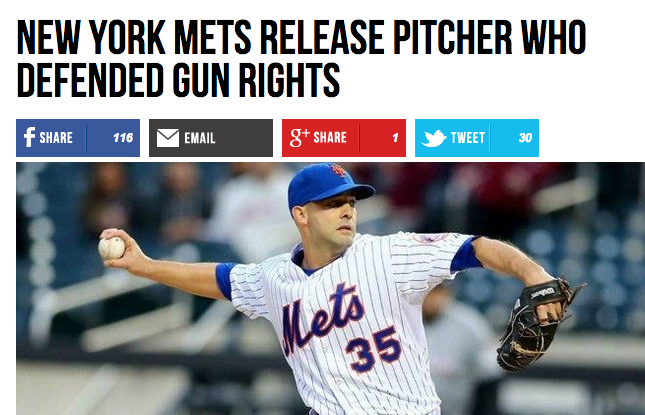 That’s Breitbart, naturally, which notes that Gee was recently involved in a little dustup in which he appeared at a gun control rally but later claimed that he was unaware that that’s what it was and that he actually supported gun rights.

Breitbart doesn’t make a connection here — they’re not saying he was released because of his Second Amendment views — but it’s certainly the case that “Major League Baseball Player supports gun rights” is not really notable. Indeed, I bet you’d be hard pressed to find a profession outside of “professional outdoorsman” or “gun store owner” which has a higher percentage of hunters than major league ballplayer.

But I do rather like the idea of describing baseball transactions in terms of the political positions of the player involved. Maybe in the future we’ll see “Flat Tax-supporting infielder traded for reliever who thinks we need to consider taxing carbon emissions as a means of funding alternative energy.”