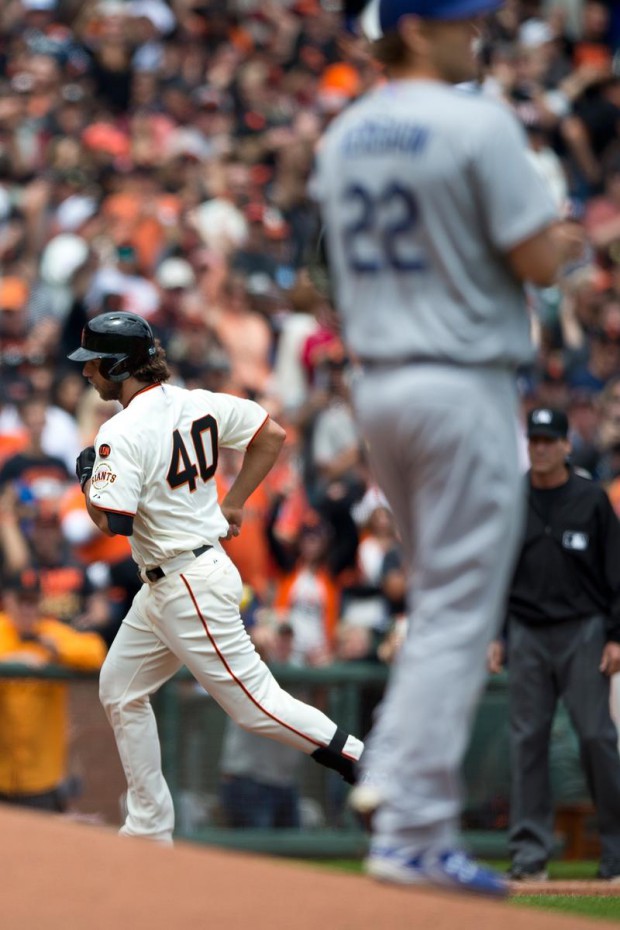 Giants 4, Dodgers 0: It’s hard to have as good of a series against your rivals than the Giants just had. In addition to your pitcher hitting a homer off the reigning Cy Young and MVP award winner, you shut them out for three straight games, outscoring them 10-0. That’s 34-straight scoreless innings for the Dodgers in AT&T Park dating back to their series there a month ago.

Braves 10, Brewers 1: Will Smith getting ejected for a foreign substance “That thing you’re doing is against the rules and we’re gonna get you run out of the game for it and you’ll get suspended but thank goodness you’re doing it because it’s to ensure the safety of our guys but Jesus, man, you have to hide that good/illegal thing you’re doing!” In other news, the whole “that guy is doing something technically illegal and ultimately it actually helps at mitigating injuries but, dude, don’t be so obvious about it” is the human growth hormone story too.

Orioles 5, Mariners 4: Steve Pearce hit a grand slam and the teams used 13 pitchers and sat at the park for hours and hours on end thanks to a lengthy rain delay. This sort of game makes me wonder why no baseball TV show — either a drama or a sitcom — has ever taken off. If you treated it like “M*A*S*H” or something episodic but character-driven you could totally do it. One whole episode would just be guys killing time during a rain delay. Some weird personal drama with the manager and his bench coach — maybe musings on old mens’ mortality — is your A-story. A running thing about guys playing cards is your b-story. The whole episode is about how ill-equipped these guys are to function outside of baseball and how, when you have three hours to do NOTHING but think about non-baseball things, they’re all at a loss. Jesus, Hollywood. Give me my development deal already. Got a head full of ideas on this.

Blue Jays 8, Angels 4: R.A. Dickey allowed four runs and five hits, walked two and struck out seven while tossing a complete game. In that baseball “M*A*S*H”-up, you have to go light on actual game action because, unless MLB Network produces it, game action footage is going to be expensive and if you try to DIY your way through it it’s gonna look hokey. But at some point you have a one-off episode in which the team picks up a knuckleballer and he totally messes up the rhythms of everything from the clubhouse and on the field and personal relationships and all around. The overall theme of that episode is baseball’s comfort of conformity and the inability of these odd and often damaged people to confront change and unconventionality in their lives.

Tigers 6, Astros 5: James McCann hit a homer in the 11th inning to put the Tigers up for good. This guy has two career homers. An inside-the-parker and an extra-inning game-winning job. All of the rest of his homers will be relatively anti-climatic now. Congratulations, McCann. Best case scenario now is that you’re Orson Welles or Norman Mailer and you spend the rest of your life trying to convince people you’re really as good as your earliest work. There are way worse problems to have, but that has to be kind of annoying.

Rockies 7, Phillies 3: These two teams have played each other for 125 straight nights. I didn’t check that to be sure, but I am almost positive that is the case. Ryan Howard homered again. Is he back? Back just long enough to create a little trade value bubble for him? Who knows. The Rockies’ had more offense, though, as Michael McKenry hit a two-run homer Troy Tulowitzki hit a two-run single and Brandon Barnes, had four hits. Jorge De La Rosa passed Ubaldo Jimenez to become the Rockies’ all-time strikeout leader with 774 in a black, white and sometimes purple uniform. David Nied has 127.

Rangers 3, Red Sox 1: Wandy Rodriguez shut the Sox down and Mitch Moreland hit a solo homer and drove in two. The Sox’ offense is stank on a stick. They’re 23rd in runs per game, 18th in OBP, 25th in slugging, 27th in batting average and 25th in extra-base hits.

Rays 3, Athletics 0: Alex Colome and four relievers combined on a six-hit shutout. The Rays have had some damn good pitching for a team which had, like, every single good pitcher get injured, get traded or come down with ebola or something in the past year.

Indians 5, White Sox 2: Three in a row for Cleveland who got six scoreless from Danny Salazar and homers from Nick Swisher — still alive apparently? Who knew? — and Mike Aviles.

Cubs 3, Padres 0: Kyle Hendricks with the five-hit shuout. Not over x innings with “x” defined as <9. Like, a legit, old school big boy shutout. Kris Bryant hit a two-run homer.

Diamondbacks 7, Marlins 6: A four-game sweep as the Marlins’ freefall continues. Keep in mind, this is a Dbacks team which came into this series having just been swept by the Phillies. The Flounders have lost seven straight.