Pedro Alvarez hit a home run the other night that left PNC Park and landed in a boat docked in the Allegheny River, just outside the park. It was quite a thing:

Also quite the thing? That a man who appeared to just be passing by when the ball landed climbed into the boat and took the ball: 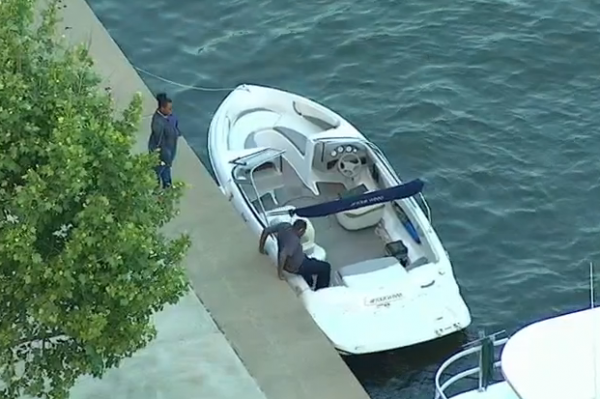 Since the homer, I have been asked by a number of people whether or not our friend in the picture above broke the law. I’m going to go with yes. In two ways. One obvious, the other less so.

As a threshold matter, the guy here appears to be a trespasser. Maybe that’s his boat, but if it is, he seemed to be walking by it as if he didn’t know it. PNC Park and the land around it abutting the Allegheny River is owned by Sports and Exhibition Authority of Pittsburgh and Allegheny County. That makes it public or at least quasi-public land. Also worth noting that, according to several boat forums I’ve read, the docking area along that wall is open to the boating public and is available on a first-come-first serve basis, which means the boat is there legally. But guys: this is no different than a convertible parked in a lot at City Hall: YOU CAN’T JUST HOP IN SOMEONE’S VEHICLE AND TAKE THINGS.

But let’s set that aside for a second. Most people asking me about this are less interested in that part of it all than they are about ownership of the baseball itself. This is, surprisingly, less clear-cut than you’d imagine, even if we can agree that in this case the law was broken.

When I was talking about this on Twitter this morning Alan Chen, a law professor at the University of Denver’s Sturm College of Law, forwarded me a link from an oldish law review article dealing with the legal ownership of home run balls. It’s long but fun reading, at least by law review standards, which talks about the history of balls flying into stands and people, you know, keeping them. Basically, the ball belongs to MLB until it’s “abandoned” to the stands, either because it’s hit there, a player throws it there or what have you. That’s easy enough, I suppose.

The impetus for that article was the then-pending case involving Barry Bonds’ 73rd home run ball hit in 2001. There the guy who first snagged the ball was a fellow named Alex Popov. He had it for a brief second. It entered his glove. He stopped its trajectory at least. However, he was almost immediately swarmed by the crowd. At the conclusion of the melee a fellow by the name of Patrick Hayashi ended up with the ball. Given this historic nature of this ball it was clearly valuable — it ended up selling for nearly half a million dollars — and when people have a dispute over something valuable, that ends up in court. Popov sued Hayashi, claiming conversion and trespass to chattel. Which is a fancy way of saying “bro, you stole my ball!”

The court ended up splitting the baby here, dividing the ball, or at least its proceeds, between them. Underlying the ruling was the notion that, though Popov had initial possession, we could not be 100% sure he’d hold on to it given the facts of the situation. And that even if you assume that he only lost it because he was attacked, Hayashi wasn’t among his attackers.

I’m not sure I buy that conclusion — old video of it makes it seem like Popov had the ball squarely in his glove and had it taken from him illegally — but that’s what the court did. At the very least it taught us all a lesson: if you’re near someone who catches an historic ball, be ready to pounce but don’t make it look like you’re one of the pouncers. Hip-checking is probably pretty handy.

But the court also gave us a key takeaway which puts at least some lie to that old notion everyone likes to parrot in these situations: that “possession is nine-tenths of the law.” That’s just bull!

“A person who catches a baseball that enters the stands is its owner. A ball is caught if the person has achieved complete control of the ball at the point in time that the momentum of the ball and the momentum of the fan while attempting to catch the ball ceases. A baseball, which is dislodged by incidental contact with an inanimate object or another person, before momentum has ceased, is not possessed. Incidental contact with another person is contact that is not intended by the other person. The first person to pick up a loose ball and secure it becomes its possessor.” 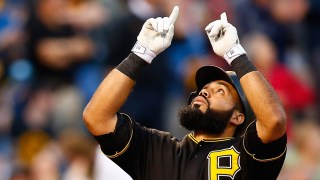 As how this applies to the Pedro Alvarez homer: The ball landed in the boat and sat there. It wasn’t going anyplace else. That is secure possession — “complete control,” to use the court’s parlance — within the property of the boat’s owner. As for “manifesting an intent to control it,” well, no, because there is no one there who could form that intent.

This case is rather easy as there appears to have been an intervening criminal act. But I’m struck by old law school hypotheticals. Like, say, a big barge goes by and its wake causes the boat here to rock so violently it spits the ball up onto the public sidewalk and someone walking by takes it. In that case I think “finders keepers” trumps the old nine-tenths rule, because the boat owner never even knew he had it. I’m sure there are a few other scenarios the law students and professors who read this blog can construct which would result in the boat’s owner being totally out of luck and our friend on the sidewalk being able to walk away with the ball free and clear. Well, he did that anyway, but other scenarios may have allowed him to do it 100% legally too.

All I know for sure is that if you go to Pitt or Duquesne law school and are taking property class next fall, be SUPER prepared to have an exam question involving Pedro Alvarez and a long home run out of PNC Park.