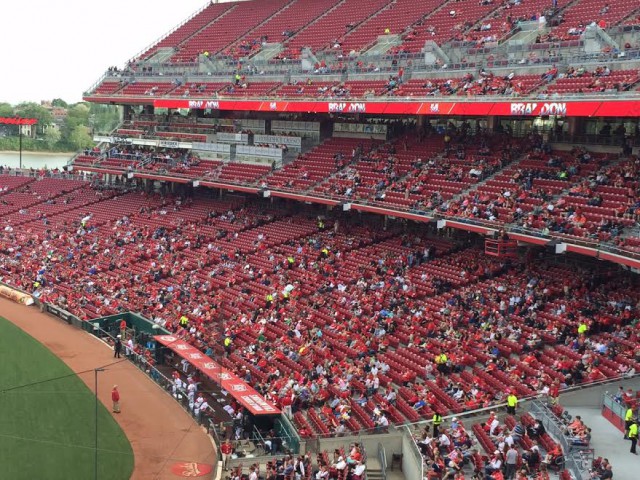 CINCINNATI — It’s a Tuesday night and the Braves are in Cincinnati to face the Reds. Both teams stand at 15-17 entering the game. That’s good enough to put them in a four-way tie for the 16th-best record in Major League Baseball. The atmosphere is something less-than-pitched. But with over 2,400 games a year and only a third of the league making the playoffs, this is what baseball usually is: a contest between a couple of teams not going much of anywhere on a random weeknight when most people aren’t really paying attention.

You’re not supposed to say that a team isn’t going anywhere on May 12. The conventional wisdom is that it’s too soon to say much of anything definitively until Memorial Day. That’s May 25. On that day the Braves and Reds will each, weather willing, be playing game number 44. But maybe that isn’t enough either?

“Once you get to 50 games, that’s where you’re kind of where you’re at,” Braves catcher A.J. Pierzynski tells me. “You know what you have then usually.”

Fifty games. A week past Memorial Day. Is that enough?

“The old adage is 54 games,” Fox Sports South announcer Chip Caray says. “One-third of the way through. Because I think it was Walter Alston who said ‘every team wins 54, every team loses 54 and it’s the 54 in the middle that make the difference between whether you go to the playoffs or not.”

I’m pretty sure that was Tommy Lasorda and that the number was 60, but we’ll leave that aside. Either way that puts us into June. At least assuming all 54/60 of those early games weren’t already allocated by the Alston/Lasorda rule. But really, June has to be enough, right?

“There’s no real exact number,” Pierzynski says, “because you look at some teams and they won’t get hot until August. It just depends . . . every team thinks it can compete because of the wild cards. The opportunity.”

May 25. May 31. June 5. June 11. August? Maybe we can’t say that a team is going nowhere until the moment they’re eliminated? Pierzynski has a point there about the wild cards and improbably late surges. It can happen. Everything has changed in that regard since playoff expansion and play-in games and the like.

But no, I’m not buying it. Not here. Not with these Braves and these Reds.

Not a Braves team with the wreck of a bullpen it’s currently featuring. Not a Braves team with journeyman Kelly Johnson batting cleanup. Not a Braves team starting Mike Foltynewicz this early in the season. Hey, I like Foltynewicz. I think he’ll be a good one. He strikes out lots of guys. But he wouldn’t be in the bigs yet if the Braves initial rotation plans had panned out and he’s not the kind of guy who would be making mid-May starts on a real contender. Besides, the Nationals just woke up, kicked the Braves’ butts all over the park last weekend and look like they’re going to be back on top of the division soon. And if they don’t win it the Mets will. The Braves don’t, as the political pundits like to say, have a clear path to victory.

The Reds? As the night began they were seven and a half back of a Cardinals team that looks like a juggernaut. Or, at the very least, a typical Cardinals team. They’re winning games like crazy despite the loss of Adam Wainwright and despite their MVP candidate, Matt Carpenter, who recently came down with what I’ll diagnose from my armchair as African Trypanosomiasis.  The Pirates are above them too, despite struggling mightily and despite getting little if anything so far from their best player, Andrew McCutchen. And that’s before you mention the Cubs who, collectively, are the closest thing you’ll ever see to a golden retriever puppy with giant feet playing baseball. Maybe they’re not great but they’re way cuter than the Reds and don’t lack for energy.

Wait as many games as you want and expand the playoffs to three or four wild card teams and neither the Braves nor the Reds will be playing past October 4 this year. I’d actually bet they’ll both be in fourth on October fourth. So why in the hell did I drive down to Cincinnati to write about this game between two meh teams going meh places in 2015?

Precisely because they’re going nowhere. Because there are no serious implications here. Oh, sure, the broadcasters and some of the media covering it came up with some “keys to the game” beforehand and “key takeaways” afterward and, as I write this, just after the final out of the game the Reds won 4-3, they’ve all gone down to the clubhouse to ask the managers What it All Means. And, to be fair, it means a lot to Bryan Price and Fredi Gonzalez and everyone who takes a check from the Reds and Braves. But does it mean that much to us? Even Braves fans like me or Reds fans like the 23,780 who paid to come down here tonight (about 75% of which, I’d guess, actually showed up)?

Yes and no. “No” in the way we normally talk about sports meaning something. About how Tuesday night’s Rockets-Clippers game meant something or how Game 7 of the World Series or any given football game means something. This game wasn’t subject to 48 hours-to-a-week of hype. There weren’t scalpers on every corner looking to make bank on a hot ticket. The results of this game didn’t keep anyone up staring at the ceiling on Tuesday night except maybe Jason Grilli, who came into a tie game, gave up two hard hit balls in the bottom of the ninth and handed the Reds the win. This game didn’t lead to extended postgame breakdowns and/or drunken revelry or sorrow in some local bar.  It was not an event. It was just a ballgame.

But saying that is no insult. Indeed, it’s the highest compliment. It’s the very essence of what most of us love about baseball. The fact that it’s not an event. It just happens.

Baseball fades into the background over the course of months rather than demand that we drop what we are doing and Take Notice. It is the soundtrack of the summer. No, not even that. It’s the score. An accompaniment which complements our days and nights but which is unobtrusive and fits into the action rather seamlessly. Something the presence of which we rarely actively consider but whose absence would be jarring. It isn’t a loud roar, but a steady, comforting hum that maintains no matter what else is going on in our lives.

And thank God for that, because our lives can and often do carry plenty of drama and intensity of their own sometimes.  A lot of times, actually. We all just need to relax a bit.

Thank God that the walk over to Great American Ballpark from my hotel was over sidewalks full of people going to and from work or running errands, not people who painted their face in team colors and formed an increasingly unruly mob en route to the game. Thank God that the American Flag was brought in by a color guard on a human size flagpole and not unfurled, a hundred yards across, in the outfield by a thousand volunteers. Thank God the National Anthem was sung by Wally and O’Weida Gosser, the couple who have been singing the anthem here in Cincinnati on and off for 52 years and not reimagined by Consolidated Amalgamated Recordings artist Vampy Scalesalot in a rendition which lasted three and a half minutes and concluded with a flyover of Quinjets from the Eleventy-Seventh Airwing of the Ohio Air National Guard.

There will be time enough for that in October. We’ll have built up to it by then and the teams involved will have earned that attention, that pomp and that circumstance. But now it’s May and we have the Braves and Reds. Playing a game like the one they played on Monday and like the one they’ll play on Wednesday and like they’ll play, day-in and day-out, for the next four and a half months.

Some of those games will be boring. Some of them, like this one, will build steadily until the ninth inning and end on a walkoff double by Devin Mesoraco or someone quite like him. They’ll feature a home run that went 20 rows up into the left field seats but which, if hit in a different park, may have been caught on the warning track. They’ll feature a couple of good, but not great, starting pitching performances. They’ll feature a 38-year-old catcher who was never really known for his defense gunning down one of the fastest men to grace a baseball diamond in the past 20 years on a stolen base attempt as if he were Greg frickin’ Luzinski. They’ll feature a run scored because one of those good-but-not-great pitchers is a bit too green to be up in the big leagues just yet and he tried too hard to get the lead runner on a sacrifice bunt and threw the ball into the outfield (Folty! When the other team willingly gives you an out, by all means, take it from them!)  A run that was unearned, even though it was the fault of the pitcher and which, if it happened in the playoffs, we’d be dissecting for years, but since it happened on May 12 between two teams not going anyplace we’ll have totally forgotten about in a week and may say something neglectfully ignorant about how he’s been let down by his defense. Forgive us if we do that. There are a lot of baseball games and they all blend together.

Blend together into a tapestry of sorts. Not necessarily a beautiful one and probably not a rich one. One that, over time, we’ll mix up with some other season’s worth of games. But one which, as it’s woven, will hold our interest each and every day, at least on some level. It’ll keep us company. Keep us out of trouble. Keep us in touch with our friends who, like us, follow the exploits of a couple dozen guys with whom we have little in common for six months at a time. Keep us from watching too many dumb TV shows. That tapestry of weighted random number generators will give us something to look forward to each and every day until it gets too cold for them to generate random numbers and we’re left stuck in the ice in some sort of ersatz Shackleton Expedition for five months, waiting for the thaw of spring.

The Braves and Reds aren’t going anyplace. Thank God they aren’t. They’re here 162 days and nights between April and October, giving us something to watch and something to do. Sure, it’d be nice for their fans if they find a way to play longer and win the World Series or something, but those 162 are enough. That’s really all we need. In a world where everything seems so laden with meaning and importance and where the things we love the most are often just out of our grasp, those 162 ultimately meaningless games are exactly what we need.