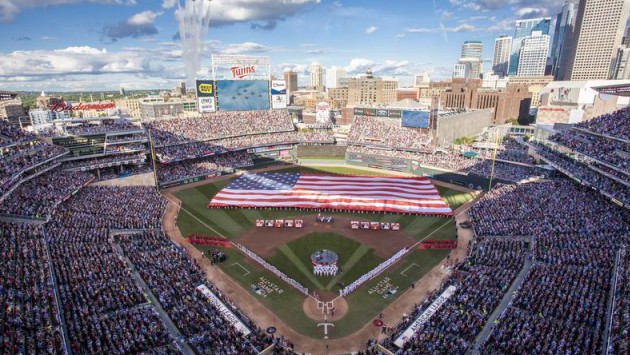 From the “Oh my GOD, do you not have more important things to get pissed about” files:

Some Twins players are noticeably absent for the National Anthem. A fan took a picture on Saturday at Target Field and counted just seven players in the line. That’s out of a 25-player roster.

Three games over 500 for the first time in five years — those are numbers any true Twins fan can appreciate.

Still, Kip Carver is questioning his loyalty after what he captured during Saturday’s National Anthem.

“I see seven Twins standing in front of the dugout, and I look toward the White Sox dugout. I’m not sure how many but an entire line of folks,” Carver said as he pointed to the picture he took.

This is not some big outcry, of course. It’s this crank and, according to the article, a few dozen others complaining.

But it’d be dumb even if it was a wave of outrage. Baseball players play, like, 30 spring training games and are on hand for 162 regular season games a year. That’s 190+ National Anthems and I’m guessing a good 75-100 “God Bless Americas.” Plus dozens, scores if not a hundred tributes to the troops and veterans and the like.

I’m all for patriotism, but maybe, I dunno, 140 or 150 conspicuous displays of it a year are good enough? If you had to stand and listen to the National Anthem before you started work every day I’m guessing you’d start to consider it a bit rote yourself.