Twins outfielder Torii Hunter is no stranger to being behind the times. In the past, he said having an openly gay teammate would be “difficult and uncomfortable“. Last December, he called a reporter a “prick” for bringing up those words at a press conference. He also called black Dominicans “imposters” back in 2010.

Floyd Mayweather — scheduled to fight Manny Pacquiao tonight — has been in hot water in the public eye for a history of physically abusing women. Some have boycotted the fight, while others have resorted to activism in other ways. With an opportunity to finally stand on the right side of history, Hunter instead chose to do nothing. Here’s a screencap of a tweet he just made (as he’ll probably delete it; it can be found here). 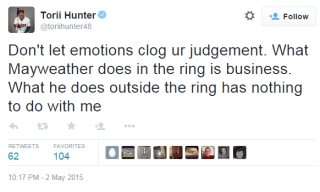 So here’s Torii Hunter summed up: who a man kisses in the privacy of his home is his business; men beating up women is none of his business.