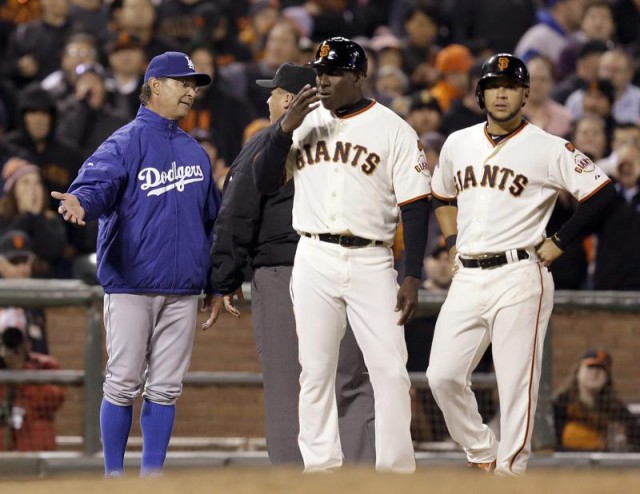 Giants 3, Dodgers 2: Joe Panik hit a walkoff sacrifice fly which scored Gregor Blanco. . UPDATE: OK, I’ve re-read the rule a couple of times and watched the replay a couple of times, and my view of this now is that, despite the contact, Blanco should not have been called out because third base coach Roberto Kelly did not “physically assist” Blanco in getting back to the bag. Read the whole justification and watch the video of the play here. Anyway, this was a big cluster and people will be, quite understandably, arguing about it for a while.

Mets 3, Braves 2: The Mets will never lose again. Of this I am almost certain. That’s ten straight. Lucas Duda hit a go-ahead single in the eighth inning. Wilmer Flores of all friggin’ people hit a homer and drove in another run on a single. He has three on the year, actually. As for the Braves, it’s amazing how fast a brief hot start is forgotten and the expectations everyone has for you takes hold. Personally I was spared this spectacle as I went to go see The Mountain Goats in concert last night. There wasn’t much about baseball there — a lot about wrestling — but they did play one song that all Braves fans should keep at the ready between now and the first week of October:

Pirates 4, Cubs 3: The most remarkable thing about this game other than the facts that (a) it snowed a bit; and (b) Addison Russell got his first big league hit was the fact that the Pirates used Tony Watson for a two-inning save. And that itself wasn’t the most remarkable part. Clint Hurdle’s quote about it was:

Rich Gossage just rolled over in his grave. And you may say “hey, Craig, Gossage isn’t dead.” He wasn’t, but he was watching the post-game presser, heard Hurdle say that and immediately died, so now he is and he’s rolling over because he still can’t even. Dan Quisenberry is dead, but he’s not rolling. He got friggin’ sick of all of that rolling and this point he just lies there, disgusted at what passes for gritty these days.

Twins 3, Royals 0: Mike Pelfrey pitched seven scoreless innings to notch his first win since 2013. The Twins scored all three runs in the first inning. Which is a good argument against time machines, really. If we had them someone, somewhere would’ve zapped ahead a couple of hours to see the outcome here, they would’ve texted someone at the ballpark about it, word would’ve spread and then there’d be no one there buying beer and hot dogs and crap. And that’s the real thing about time travel no one ever talks about. Sure, we hear all about, like, going back in time and killing your enemy’s grandfather so your enemy is never born or going forward and getting all of the box scores for the next decade, coming back and growing rich on your gambling “skill,” but the economic dislocation would be the biggest impact. That and everyone losing their ambition and will to live life going forward under the delusion that we can make things happen and otherwise affect some sort of positive change on this doomed world. Time machines would sap us of this fiction. We’d all die in our beds, as unmotivated to carry on as a bunch of flops in some 19th century opium den.

White Sox 6, Indians 0: Jeff Samardzija tossed six shutout innings, the bullpen kept it up for three more and Jose Abreu homered, doubled and drove in three. That is pretty much the Platonic Ideal of a Chicago White Sox win in 2015. They have, like, animated video simulations of this playing on monitors and glossy brochures in this freely available in the lobby of the White Sox offices for everyone to see.

Cardinals 7, Nationals 5: St. Louis jumped out to a 5-0 lead, let the Nats jump back to 5-5 and then pulled away in the eighth on a Kolten Wong double and added some insurance in the ninth because the Nats just don’t have a very good bullpen. Wong’s two-run homer was part of that jumping out part earlier and he ended up 3-for-4 on the night.

Marlins 6, Phillies 1: The Fish end their five-game losing streak. The Phillies are gonna end a lot of losing streaks this year, I reckon. Five unearned runs charged to the Phillies because, woof.

Blue Jays 4, Orioles 2: Homers from Devon Travis and Justin Smoak. Travis has four homers on the year and they’re gonna take the Rookie of the Year line off the board at whatever degenerate casinos allow degenerate gamblers to bet on stuff like “who will win Rookie of the Year.” Jays pitcher Aaron Sanchez walked seven guys. If you, like the Orioles here, walk seven times and lose, man, I can’t help you.

Yankees 13, Tigers 4: Six runs off David Price in the first inning ended this one before it began. Which is a shame given how cold it was — snowed here too — but the rules say you gotta play nine unless it rains. And Price sat in the dugout for all nine, even after he got pulled:

Price said he stayed in the dugout after being pulled, instead of retreating to the warmth of the Detroit clubhouse.

“You throw the ball as bad as I did and you give up more runs than you get outs, you don’t deserve to come up here,” Price said. “That’s why I stayed out there.”

Your sacrifice is bold and brave, good sir knight. Coffee is for closers, etc.

Rays 7, Red Sox 5: Tampa Bay was down 5-1 heading into the bottom of the sixth when Jake Elmore — who just got called up before the game — homered and Brandon Guyer hit a two-run, pinch-hit single in a four-run sixth inning. The Rays break a four-game losing streak. Dustin Pedroia and David Ortiz homered in winning efforts in a losing cause.

Reds 2, Brewers 1: Billy Hamilton came home from third on a wild pitch with two outs in the ninth, sending the Brewers to their seventh straight loss. Maybe they need to listed to that Mountain Goats song. And make sure time machines aren’t invented. As for the Reds, that’s three straight wins since Bryan Price’s F-bomb dropping rant. One or two more of these and some jerk is gonna write the “Price’s rant motivated the Reds” column. I mean, there’s a non-zero chance I’m that jerk, but that won’t make such a column any less dumb.

Rockies 5, Padres 4: Corey Dickerson had two homers, with his second one serving to tie the game in the eighth inning. Then, in the ninth, pinch-hitter Daniel Descalso smacked an RBI single for the walkoff. Both Dickerson and Nolan Arenado were out of the game on Tuesday due to various ailments. Both came back last night and came up big. Dickerson for his bombs, Arenado for some of his patented stellar defense, an RBI double and his run scoring on Descalso’s walkoff single.

Diamondbacks 8, Rangers 5: Archie Bradley walked five in the first three innings of work, including one walk with the bases loaded. That normally doesn’t bode well for your evening, but he gutted it out, lasted six innings allowing that lone runs and got the win. Four double plays by the Dbacks’ D helped, as did Chris Owings homering and hitting an RBI single.

Athletics 9, Angels 2: A pitcher’s duel until the seventh when the A’s scored five. They added three more in the eighth. As for the duel part, Sonny Gray allowed one run over seven innings, besting Jered Weaver who allowed one run in six before handing it over to the Angels bullpen to poo all over.

Mariners 3, Astros 2: Houston loaded the bases with two outs in the eighth and put runners on the corners with one out in the ninth, both times coming away with zero runs. That’s how you lose games, folks. J.A. Happ allowed two runs in seven and a third in a much-needed strong start for the Mariners.