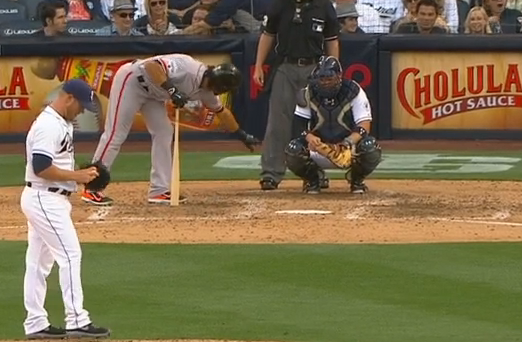 Fun stuff from the ninth inning of yesterday’s Giants-Padres game.

Angel Pagan was facing Craig Kimbrel, with Derek Norris behind the plate. Pagan tossed his gum away and it ended up hitting Norris’ glove. Norris didn’t much care for that and the exchanged words for a minute. When they resumed, Kimbrel’s next pitch to Pagan was up and in.

Was this all about gum? Apparently so. Just ask Derek Norris after the game:

Derek Norris on Angel Pagan: “He was just being kind of a dickhead, and I don’t take kindly to that.”

Fair enough. Maybe it’d have more gravitas as a statement if it didn’t come from someone who spends entire games spitting into and around the batters boxes where dudes have to stand all day, but he believes what he believes and expresses it clearly.