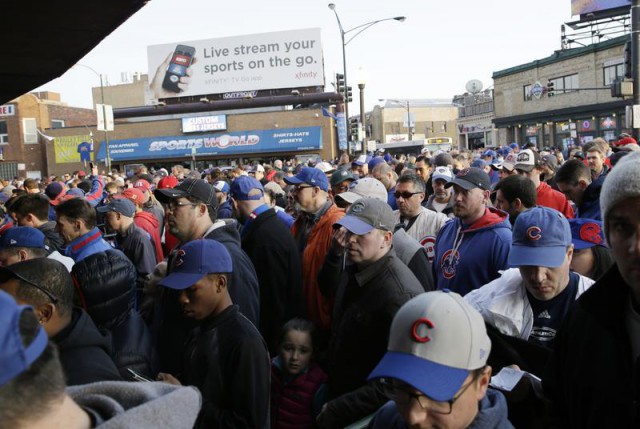 Bill and I both linked to stories about this earlier, but the more I’ve read about it, the more it sounds like an actual big deal as opposed to a mere Opening Night hiccup. I’m talking about the Wrigley Field bathroom disaster.

you’re going to hear jokes and hyperbole about the Wrigley bathroom lines. Please note, they are likey UNDERstating the issue.

My first thought when I heard about this was “welcome to what women face at ballparks, dudes” because women’s bathroom lines are always bad, but this does not seem to be a mere issue of men finally being inconvenienced like women always are. This was something a bit more extreme:

@craigcalcaterra I was at the game. The women’s line was utterly DWARFED by the men’s line at the 4th inning

Deadspin’s take here. Jeff Passan, who was at the game, reports on the problems here. UPDATE: Deadspin now has more pics and emails from people who were at the game, making the problems seem even worse than first reported.

UPDATE: The Cubs have given a full statement in response to this mess. The earlier statement we reproduced in this post came from a news source which, for whatever reason, only ran part of the team statement and excised the apology. Here’s the full statement:

Opening Day at Wrigley Field has always brought challenges with wait times and tonight was particularly extreme.  Two bathrooms in the upper deck went down temporarily forcing fans downstairs where we already were experiencing issues with long wait times.  With 35,000 fans showing up in the ballpark tonight, we were simply not prepared to handle guests during peak periods.  We have high standards for service and we missed the mark tonight.

We want to apologize to our fans for the inconvenience tonight.  Moving forward we plan to supplement the existing restrooms with additional portable units and will continue to monitor wait times.

Good on them for apologizing, but it’s hard to see how a couple of malfunctions could lead to such a large problem. Maybe excessive daytime pregaming on the part of baseball fans led to, um, a greater overall urge. But ballparks have a finite capacity — Wrigley Field’s being even smaller than usual due to the lack of bleachers during the renovation — and the Cubs knew they’d have a full house. Even the most rowdy, drunk and amateur hour of dude-bro baseball fans would prefer to pee in a bathroom, not a beer cup out on the concourse, and the fact that they couldn’t suggests an issue with the facilities.

And at least one HBT reader says that this was not some unusually crazy-drunk crowd:

@craigcalcaterra I’ve never seen anything like it. Also, I’ve been in some very drunk Wrigley crowds, this was not one of them.

I’m less interested in the apologies here than a breakdown of what has happened to the bathrooms in the course of the renovation. Specifically if the fan-to-toilet ratio has gotten “particularly extreme” while the work is being done. I’m not even joking when I say that, maybe, this is all the result of a trough deficit. You know, those ugly old communal urinals from days of yore? 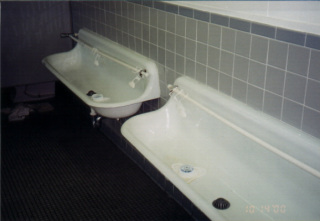 Wrigley Field was, I think, the last ballpark to feature them. I wonder if they’ve lost some in the renovation and with them some efficiency. I’d go on about how perhaps this dark cloud could, perhaps, have a golden lining in that it could lead to the glorious return of the men’s room trough, but I feel like doing so would be to oversell the point.

In any event, it wouldn’t shock me if there were porta-potties at Wrigley for Game 2.