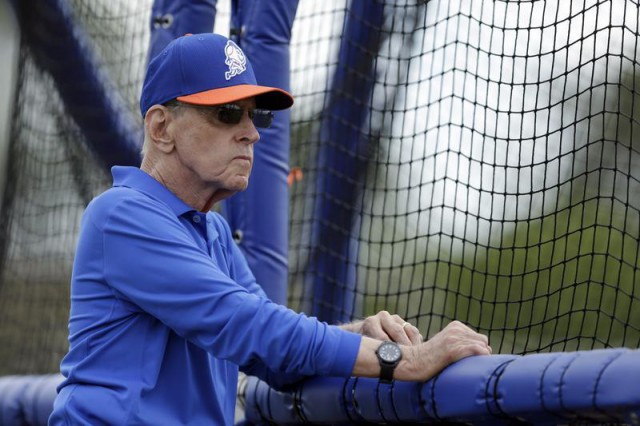 Yesterday Mets owner Fred Wilpon held a closed-door meeting with his team. Then he opened the door and left and did not answer reporters’ questions about what was said behind closed doors. If I was Wilpon I’d probably say something like “well, the reason the doors were closed in that meeting was because what was said was not for public consumption,” but you can’t fault him for not doing that. I mean, that’s implied, right?

Apparently not clearly enough, because this morning at least three columns were written about Wilpon not talking to the media about what he said to his employees in a private conversation.

By all accounts this was a terrific meeting. Without going into specifics, David Wright said, “Fred has always been upbeat.” Terry Collins said it was “very, very impactful.” There were no threats, no win-or-else edicts issued. Wilpon played his hand to perfection, at least until the meeting ended and he strolled by a group of reporters.

That’s when Wilpon blew off a chance to deliver a state-of-the-team address. Instead of stopping, even for a few moments, to pump up the fan base, Wilpon walked right by. Not a word, not a gesture, no eye contact. Just feigned oblivion.

Fred Wilpon had plenty to say Monday at Tradition Field, where the Mets’ principal owner has been more visible this year than during any other spring training in recent memory . . . In fact, Wilpon has spoken to just about everyone during the past six weeks, with one notable exception.

And that’s not right.

Anyone who has reported on the Mets since 2011 knows the Fred Wilpon blowoff . . . The Mets beat writers received what I’m assured was a very polite version of this on Monday morning in Port St. Lucie, after he addressed the team (the Mets resist the notion that Wilpon “blew off” the media when he cruised by, and say that he simply didn’t wish to speak about a private meeting).

All of these columns were couched in terms of “hey, Wilpon is not speaking to you, the fans!” But I truly question if any Mets fans exist who actually care and/or believe what Fred Wilpon says after all of these years. They’d sooner punch him in the face, I suspect, than hang on his every word. Unless they did so in order to loudly declare why each of those words was a damn hurtful lie.

But maybe some Mets fan, somewhere really would feel better if Wilpon told him that the Mets were going to be OK. I’m not sure I want to meet such a strange, gullible person, but they may actually exist. And if they do I suppose I will grant that this is a legitimate complaint rather than the latest instance of late spring training media complaining.