Louisville Slugger is such an iconic part of baseball that it’s easy to think of them as some behemoth of a company, but they really aren’t. It’s just a concern down in Louisville that, while it happens to have big market share and brand identity among baseball fans, is just an independent company. One division of the relatively small Hillerich & Bradsby company, named after the founders of the bat business.

At least it was until today. Here’s the press release:

Which probably won’t affect all that much for us fans.

It does create a good opportunity for competitors though. Like, say, Phoenix Bats, which is located here in Columbus. They can now market themselves to hipster ballplayers as an “indie bat company.” They can use the word “artesianal” too. Maybe “farm to table” assuming bats are grown on farms and used on tables. We’ll let the marketing people figure it out.

In other news, are there any hipster ballplayers? I mean aside from Paul Reuschel? 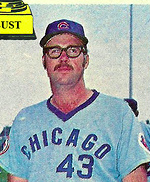