Baseball fandom can be weird. Most people fall into their rooting interests due to geography or family. We’ve done it a bit different in the Calcaterra household, however, and it has led to unexpected results.

While I started out as a Tigers fan due to geography, that changed to the Braves when I was 12 or 13 when I moved away from Michigan and the only team I could watch on a regular basis was the Atlanta Braves. I have explained all of that before.

My kids are another story. Despite what I do for a living, I’ve never pushed sports on them. Far from it, actually. There were some efforts at soccer by my son, but he got bored. My daughter has danced and recently has started riding horses, but sports are really not a part of their lives. Like, at all. Especially team sports. They watch baseball games with me sometimes, but most of my baseball watching happens later in the evening when they’re doing other things. For the most part we’re a pretty non-sporty family, and I have done nothing to force or even encourage rooting interests of any kind.

But, I suppose inevitably given all of the baseball I watch and talk about and all of the baseball stuff I have around my house, they have started to become baseball fans. Those occasional games we watch together are becoming more frequent. And over the past couple of years it’s been interesting to watch some level of baseball fandom develop in my kids.

They have some affinity for the Columbus Clippers, because those local Triple-A games were the first games they ever saw. But they also, eventually, came to realize that “minor leagues” are in some important ways “inferior leagues” so the fandom can only go so deep.

Their first major league game was a San Diego Padres-Texas Rangers matchup while we were on vacation, and for that reason they have good feelings about them too, but that’s more about that vacation and visiting their uncle Curt and stuff like that. It’s not like they knew anyone on the Padres besides Jason Marquis, who pitched the night we went to Petco. And who cares about Jason Marquis?

Local rooting? That’s straight out for them. We’re over 100 miles from Cincinnati and even farther from Cleveland. Unlike what may have been the case until recently, they’re not tied to local broadcasts. Indeed, with MLB.tv and Extra Innings it’s actually easier to get broadcasts from outside of Ohio rather than inside (great job, MLB!). And even if that wasn’t the case, I have already taught them that Chief Wahoo is racist garbage, so they’re never going to care for the Tribe, which cuts their chances of being Ohio baseball fans in half.

But something has happened over the past year or two that has made my kids — particularly my son — Los Angeles Dodgers fans.

A good bit of this is my fault, of course. At some point over the past two years they started asking me a lot of questions about “who’s the best” at this and that. Pitching fascinates them quite a bit, and as a result they are very clearly aware that, at this moment in time, Clayton Kershaw is the best. The idea of who the best hitter is hasn’t stuck with them as much, probably because I’ve differentiated more when it comes to answering their hitting questions. Sometimes we talk about power hitters, sometimes guys who hit for average.  Often times — because they recognize historical hitters’ names like Hank Aaron and Barry Bonds — we talk about old retired dudes. There’s no real idea in their head about the best hitter like there is about Clayton Kershaw: best pitcher. So they like him.

But the real game-changer, particularly with my son, was Yasiel Puig. At some point in the past two years he heard me saying something about Puig. Maybe while doing a radio spot, maybe while just talking, but he knows that I talk about Puig differently than I talk about other players. He asked me why that was one time and I explained how Puig is different than a lot of other guys for many reasons.

For one thing, he’s Cuban. My son LOVES the idea of Cuban baseball players because of what I’ve told him about how they risked their lives to get here to play (Aroldis Chapman is a favorite of his too). That’s some heroic stuff to anyone, but it really hits home with a nine-year-old boy who has lived a pretty sheltered life and loves tales of danger and adventure.

More generally, however, he absolutely loved it when I told him that Puig is a guy some people don’t much care for. Eventually, as I explained why, he boiled it down to “old grouchy men don’t like Yasiel Puig because he’s too damn much fun.” Hey, he’s my kid. He’s going to come by his contrarianism and love of chaos honestly. So between the origin story, the anti-hero stuff and seeing this insanely muscular yet insanely fast and insanely animated man crush baseballs, my boy has decided that Puig is basically Superman. If Superman annoyed old people in ways which really make my boy giggle. And make his dad giggle too.

This love of Puig led to him getting a Puig shirsey, which he wears all the time. That led to his teacher calling him “Yasiel,” which has sort of stuck with his friends. My boy loves it. He plays Minecraft a lot and has a pet pig in the game named Yasiel Pig. Add in some other random factors — both of my kids have it in their heads, based on one visit, that California is some sort of paradise, Los Angeles is glamorous and the only time I’ve ever really let them stay up super late to watch baseball was when Vin Scully was broadcasting a 10pm Eastern Dodgers game or two last year — and there are number of small bricks in that Dodger Blue wall. When you’re a blank slate as a baseball fan it’s pretty easy to create your own fandom story

Last year when the Dodgers came to Cincinnati we went and saw a game, my son and I in our Puig shirseys (I own one for trolling purposes and for solidarity with my kids purposes) and my daughter in her Kershaw shirt. We cheered for the Dodgers and Yasiel Puig and had extra fun doing it in enemy territory. Last week, when I asked my kids what sort of souvenirs they wanted from Arizona, they both asked for Dodgers stuff. T-shirts and pennants. Just today, when I asked my son about whether he’s going to watch more baseball with me this season he asked if it’d be OK if we recorded Dodgers games and watched them the next day since they came on so late.

Last night, instead of reading in bed, my son asked me if he could write and draw. I found this in his room this morning: 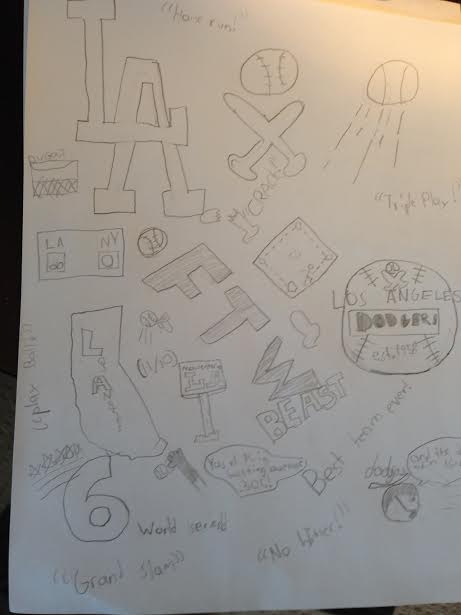 Some of that — like the dubious “established 1958” — is just copied from Dodgers junk around the house (I have explained Brooklyn to him and he gets it). Some of it is stuff he asked me, like how many titles they won. Some of it is pure fantasy like the scoreboard which has the Dodgers beating one of the New York teams infinity to zero. Which, whatever you think of the Dodgers, is a nice touch.

All of this is so strange to me. What are the odds of these Ohio kids with a Braves fan dad becoming Dodgers fans? What are the odds that this fandom sticks? Are they old enough for me to taunt when the Dodgers play the Braves and we watch the game together? Most importantly, if what they say about baseball being a thing between parents and their children is true, can it go in both directions? Because I’ll be honest: while I’ll always be a Braves fan, I’ve enjoyed Dodgers stuff way, way more in the past couple of years precisely because my kids enjoys it so much. It’s as if they’re passing it on to me rather than the other way around. Am I a Dodgers fan now too? Maybe in some ways I am.

I guess what strikes me the most about all of this is a realization of how the more traditional modes of familial baseball fandom — the tired cliches of fathers and sons and things being passed down — are sort of random to begin with. They’re accidents of geography and birth, even if we accept them as the norm. So it probably doesn’t matter much that my kids’ Dodgers fandom is rather random too.

I suppose that probably annoys some grouchy old men. But as it is with Yasiel Puig, that’s not criticism to anyone in my family. That’s a selling point.