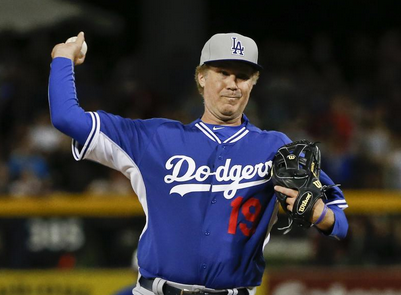 Joe Maddon, from this morning’s media session, when asked about the Will Ferrell stuff from yesterday, passed along by my friend JJ Stankevitz from CSNChicago.com, who is at Cubs camp:

If you want to connect to a different generation of baseball fans, maybe it’s important to include part of the pop culture outside of the industry that they’re really into, whether it’s music, whether it’s comedy, whatever it may be to get maybe this ancillary group to become more involved with us. And then that’s jut going to draw the kids in or that younger generation in on top of it. I thought it was brilliant.

Never thought of it. Perfect time to do it — spring training game, of course, it matters but it doesn’t’ matter in the bigger picture. But it mattered in the sense that I am certain — I would like to believe it, I would say, pretty strongly that kids who would never watch what would happen in a baseball game watched yesterday because Will Ferrell was involved. And then with Will Ferrell or whomever starts talking more about baseball and gets the kids drawn in through those means, that’s great also. Whoever thought of it, I thought it was brilliant.

Perhaps he’s overselling what Will Ferrell can accomplish, but I think he’s right on about the incorporation of non-sports pop culture in some way helping to broaden baseball’s appeal. Even with the Ferrell thing I have had several friends who aren’t baseball fans ask me about it. It drew the interest of people outside the game. That event isn’t likely to have any sort of big lasting impact, but the idea of placing baseball in front of people, even for the moment, who wouldn’t think much about baseball is a good one. It’s a good way to prevent that whole “I don’t even think about baseball until the World Series” mentality that seems common.