MESA, Ariz. — It’s not brand new. They played here last year. But I was in Florida last year and didn’t see it. And does anything truly exist in any way outside of our sensory perception of it? That’s deep, man.

Either way, this place is a friggin’ palace: 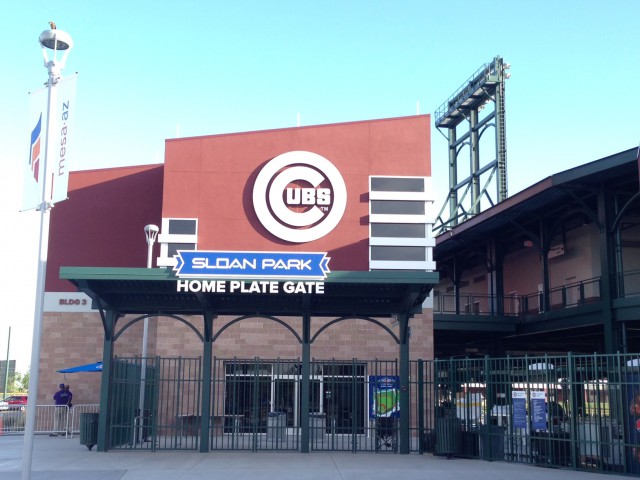 Based purely on architecture and aesthetics (as I write this the game hasn’t started so I can’t give it a full grade) it has got to be up there at the top of any sane list of best spring training parks. Also on that short list is Jet Blue Park in Florida. Which is so much fun. There was a time when the Cubs and the Red Sox were thought of as two of the saddest organizations going, playing in old facilities and all of that. Now Fenway has been wonderfully renovated, Wrigley is on its way there and they play in the top two spring training joints in baseball. If the Cubs win a ring in the next couple of years the world will have officially been turned upside down. 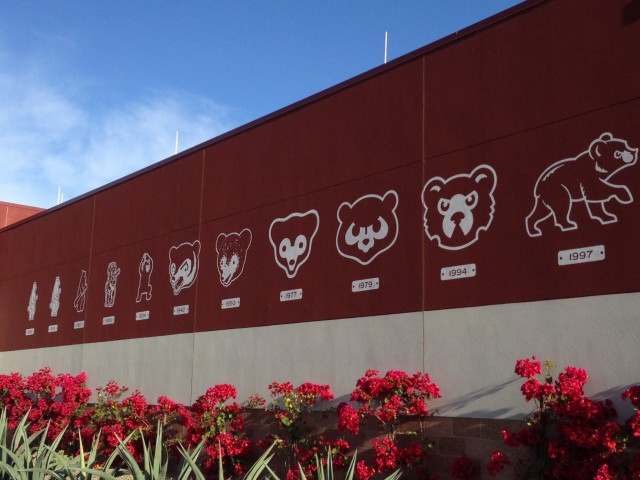 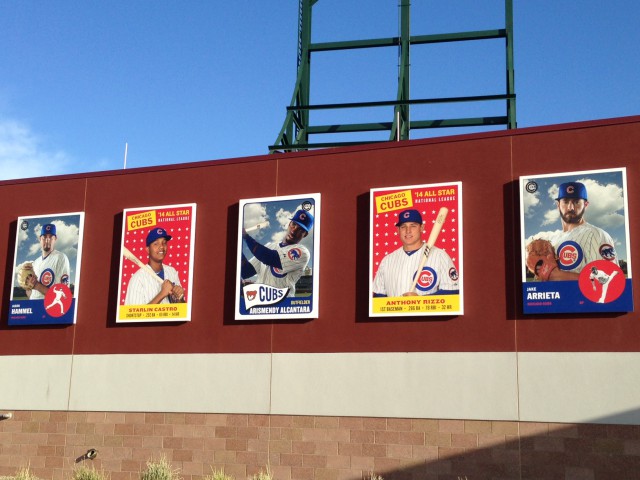 Most teams put banners of their players on the side of their stadiums. The Cubs do so in the style of throwback Topps cards. Advantage: Cubs. 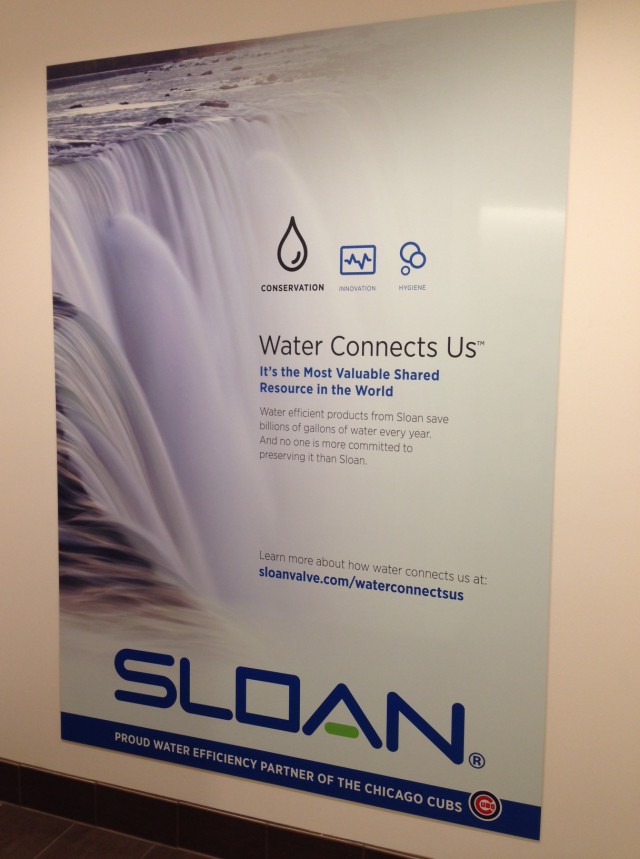 The park is now called Sloan Park, named after the “Proud Water Efficiency Partner of the Chicago Cubs.” Sloan takes this seriously. This ad is from the wall of the men’s room in the press box. 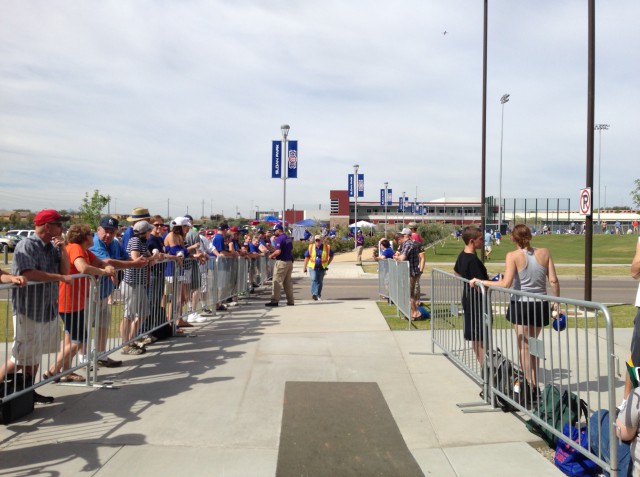 This photo is taken looking out from the press and team entrance to the ballpark, looking west. The building in the distance there is where the clubhouse and team offices are. Most new facilities have these parts of their spring facilities separated, but I believe the Cubs’ is the only one that has such a defined walkway between the two, allowing fans to watch players come on over and get close. Usually there are any number of ways to the main park, some out of sight. The Cubs might have this too — I didn’t see all of the players actually come over — but this is a nice touch. 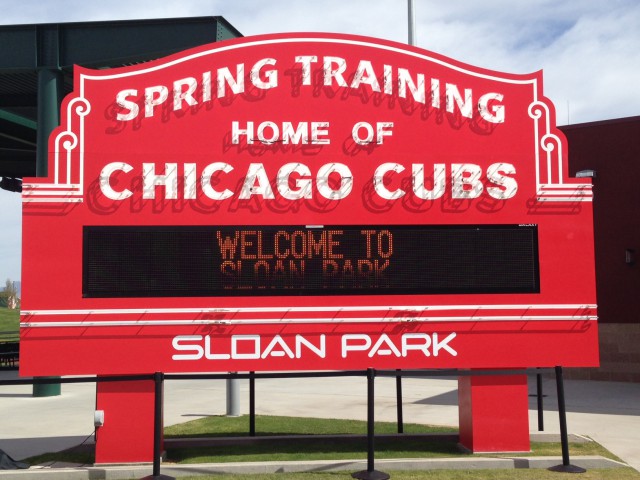 There are a lot of callbacks to Wrigley Field here, obviously. 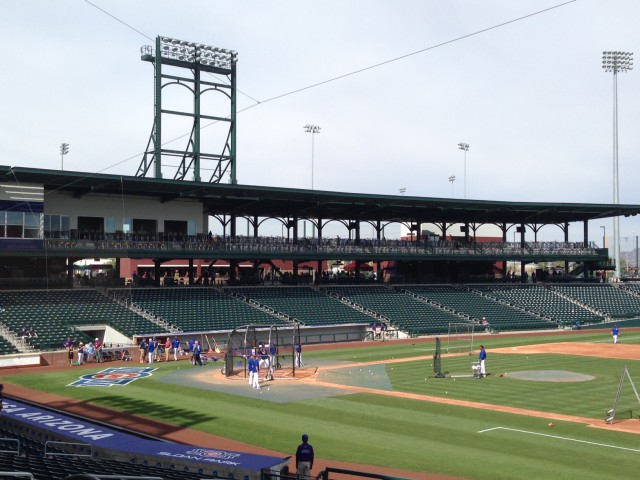 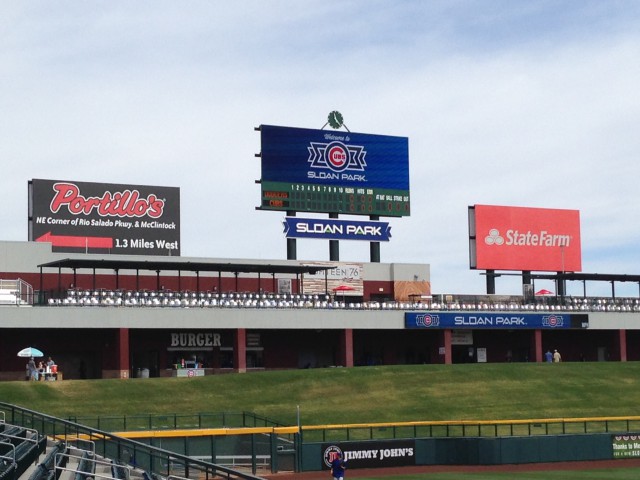 Even more Wrigley callbacks, though just barely with that scoreboard. I will say, though, that the new frontier in spring training joints is outfield seating. The Cubs’ old place — Hohokam Park — didn’t have any seating in the outfield when they were there. Just a fence and nothin’. The next generation of parks brought in outfield berms and most places have those now. Bright House Field in Clearwater, Jet Blue and now Sloan Park have some pretty substantial outfield seats and/or concession areas. These places are feeling less and less like minor league parks and more like something in between minor and major league places. 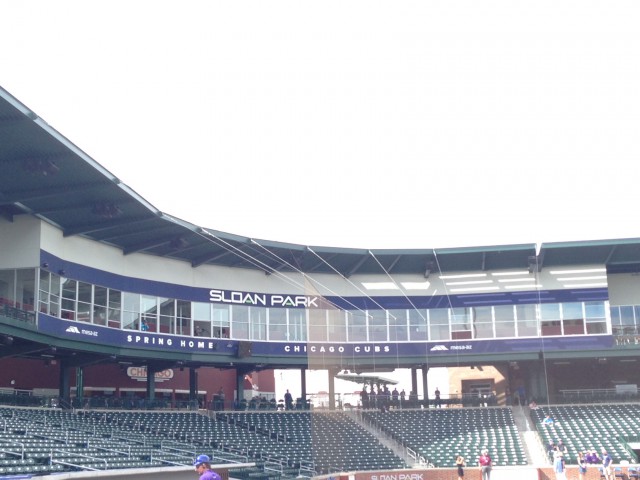 The press box. Today I’m sitting in the second window from the right. Not bad seats. 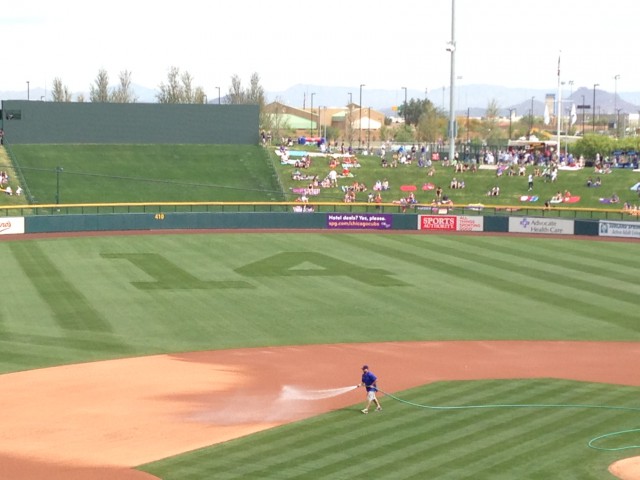