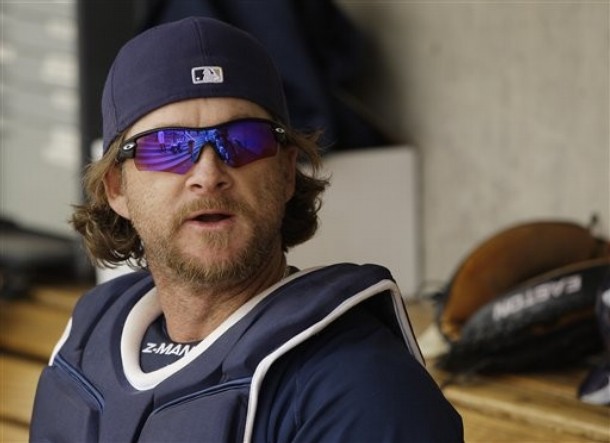 Some serious tough guy stuff from former big league catcher Gregg Zaun, talking smack about former Blue Jay Brett Lawrie, who he claims didn’t respect his elders. It has all of the fun cliches. Young players, Zaun says, “need to be made to respect the game, the clubhouse atmosphere, their elders.” He says “[y]ou cannot allow these kids to go running amok. You have to “nip it in the bud.”

How do you nip that in the bud? Oh, the usual way: physical abuse and public humiliation. Like Cal Ripken and the veteran Orioles did to the young rookie Zaun back in the day because he “was too talkative.”

I’ll never forget it: I was out in the stretch circle, I played catch with Chris Hoiles every single day, and I lobbed the ball to him — and he was paying attention, but he pretended like he wasn’t. He head-butted the ball and all of a sudden I had what was called “the posse” all over me. Cal Ripken, Ben McDonald, Brady Anderson, Chris Hoiles, all of the above. They beat me on my ribcage, physically abused me on my way to the training table. They taped me spread-eagle to the training table, they wrote “rookie” on my forehead with pink methylate, and they shoved a bucket of ice down my shorts. I missed the entire batting practice, and you know what? Phil Regan, the manager of the Baltimore Orioles, he did not care, because he knew that what those guys were doing was ‘educating me.’

If I had a dollar for every time Cal worked me over, physically, I’d be a pretty wealthy guy. He still owes me a suit! He told me flat out, he said, ‘You are never to come past this point into the back of the plane, under no circumstances.’ So, I’m in my first suit that I paid for myself as a Major League player, feelin’ real frisky, and Cal says, ‘I need you to come here.’ And all of a sudden I crossed over that imaginary barrier line. He tackled me, wrestled me to the ground. They had just got done eating a bunch of blue crabs in the back of the plane, so there was nothing but mud and Old Bay seasoning everywhere. He throws me to the ground and he tears my suit off of me, and I’m like, ‘What are you doing?’ And he goes, ‘Remember when I said that under no circumstances do you come back here?’ I’m like, ‘Well you just told me to!’ ‘I said under no circumstances, and that includes when I ask you to come back here.’

To which I’d say: no, they don’t, actually. Not at all. And anyone who thinks that physical abuse and various forms of hazing is a proper way to instill respect and a good work ethic, they’d certifiably insane.

Or did I just miss all of those stories about Hank Aaron, Al Kaline and Stan Musial physically abusing and humiliating rookies?