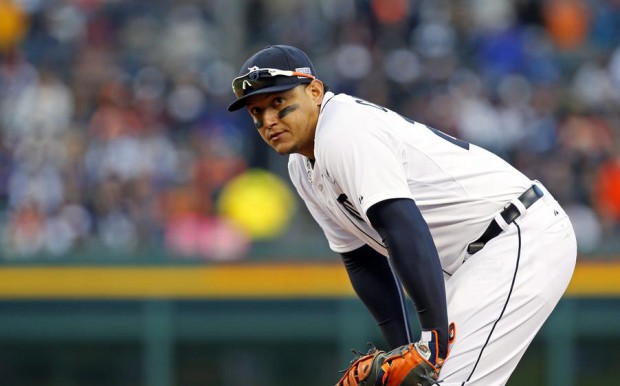 Crazy, right? An intemperate hot take totally slamming and disrespecting the player? Well, I guess it must have been because this is a response I woke up to on Twitter this morning:

According to @HardballTalk Miguel Cabrera began to decline in 2014? He hit .313 with 25 HRs WITH A DAMAGED ANKLE ALL YEAR @craigcalcaterra

@craigcalcaterra @HardballTalk your hatred for Cabrera and Latin players is sad

Granted, this particular correspondent is a tad more unhinged than your usual reader. He is on a three-year streak of claiming a guy who won two straight MVP Awards is disrespected and underrated and has never stopped accusing us of being racists and anti-Latino for whatever reason. Tigers fans I know think he’s kind of insane.

But even if this particular person and his particular response is extreme, the pattern is fairly common: objective criticism of a player (if you can even call what D.J. wrote criticism) is met with claims that the writer is “biased” or that they hate the team in question.

Just about every sports writer encounters this. Buster Olney hilariously refers his critics to a chart our own Bill Baer created  in which he has been accused of hating all 30 teams. A running joke exists in which Keith Law hates every team on which he comments. I am routinely accused of hating the Cardinals and the Phillies when, in reality, I just like winding up their easily-wound up fans. OK, so in my case I get why I get those reactions — and I actually seek them out — but the trolling stuff aside, it’s all rather hilarious to see sports fans truly believe that any given writer cares enough about their rooting interest to actually hate them. To harbor grudges over baseball games of all things.

And it’s not just the crazy people. Spend enough time engaged in sporting discourse — and I spend all day in it — and you begin to realize that even fans who are not unhinged like our friend above often possess tremendously large blind spots when it comes to the team they root for. Even the incredibly smart and reasonable folks.

It’s not a bunker mentality with the smart ones. It may, for example, manifest itself in a very reasonable proclamation that they are no longer following a given, admittedly bad sports writer . . . but it just so happens that the tipping point was a column criticizing their favorite team. Or perhaps you’ll see it manifested in the criticism of a rival team or player for Incident X, while being strangely silent when their own team involves in almost identical behavior. A totally reasonable criticism on the merits, to be sure, but one which consistently, and quite curiously, only comes out when it is the rival in question. Indeed, with so many sports fans — and again, I include the sharp ones in this — where they come down on a given issue or controversy on any given day can be pretty damn reliably predicted by who they happen to root for.

In this way sports discourse is surprisingly like a lot of political discourse. A given voter, commentator or politician may be 100% capable of hashing out a given point of policy and, given the heterogeneity of the population, they could reasonably come down in any number of places. But nope: if you know their party affiliation, you know where they’ll come down before they even speak. The tail wags the dog.

Indeed, there’s a strange overlap or mirror-imaging when it comes to sports and politics.  A strange bizarro world in which fans of sports teams imbue their rooting interests with righteousness and opponents with wickedness while supporters of a given political party talk of their affiliation as their “team.” As if something clearly irrational like sports fandom must be explained as if it were chosen on clear and objective merits. And where the support of political positions — most of which should be able to be explained in objective pro-and-con policy terms — is really often determined by an irrational brand loyalty to their chosen party. Fans offer virtual position papers on sports, politicos wave pennants and pride themselves on being diehard supporters of their little granfalloon.

Maybe it’s always been this way and, like a lot of things, it’s only apparent now because of how easy it is to interact with people online. But it’s pretty damn crazy when you consider it all. When you realize that a HUGE portion of sports commentary is, practically speaking, no different than kids yelling “my old man can beat up your old man” at each other on the playground, even if we try to dress it up as something greater.

But, no, seriously: we hate your team. A lot.