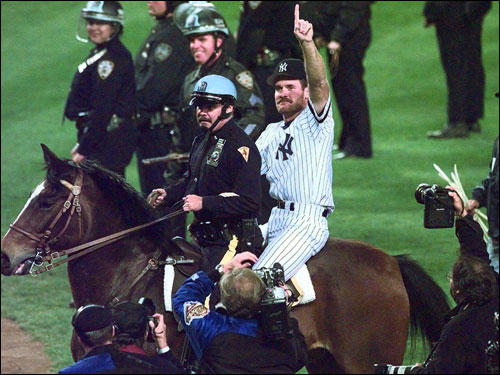 “I went camping with Brasky … I’m in the back of a pickup with Bill Brasky and a live deer. Well, Brasky, he grabs the deer by the antlers, looks at it and says, ‘I’m Bill Brasky! Say it!’ Then he squeezes the deer in such a way that a sound comes out of its mouth — “Billbrasky!” It wasn’t exactly it, but it was pretty good for a deer.”

A Montana man has been ordered to pay a $3,000 fine after pleading guilty to federal wildlife violations while leading former Boston Red Sox third baseman Wade Boggs on a 2009 sheep hunt in Alaska . . . The main objective in Boggs’ hunt was Dall sheep, but he also voiced interest in shooting a bull caribou, according to a sentencing memorandum filed by Assistant U.S. Attorney Stephen Cooper.

His guides told him, sure, go ahead and kill the caribou, no worries. Problem was that Boggs didn’t have a license for that. The guides gave him a backdated license and this is why they’re getting sentenced now. Boggs is in the clear, though, as it appears he had no idea he wasn’t supposed to do that or that there was an issue with getting a license after the fact.

In other news, Wade Boggs’ life is more interesting than that of most former ballplayers.

(thanks to Chris Needham for the heads up. He lives to serve blogs with headlines that try to snag readers with outrageous headlines)