ESPN’s Pedro Gomez took on all comers last night. It led to this exchange: 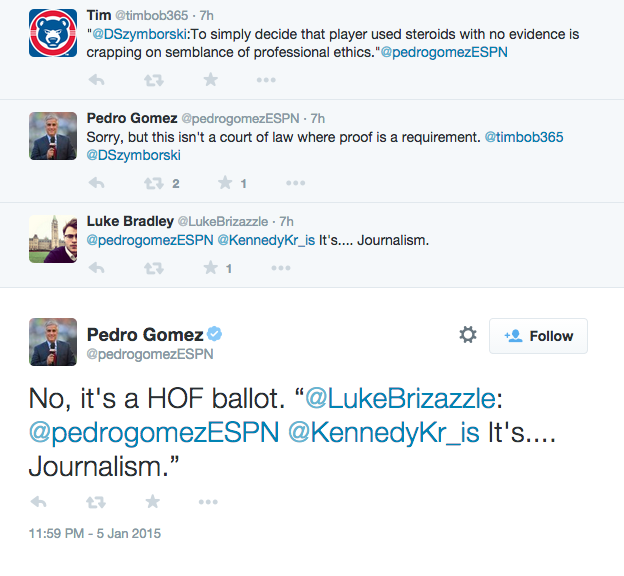 Gomez is cute. He thinks that the folks in Cooperstown made baseball writers Hall of Fame voters because of some independent quality of reason and discernment separate and apart from their baseball journalism experience. Like he’s some sui generis oracle of insight, thus enabling him to leave all of his professional experience and modes of operation at the door and just Do Hall of Fame Justice.

Say, Pedro, how does that Hall of Fame Justice work anyway? Like, for say Jeff Bagwell and Mike Piazza?

I asked him what decisions Piazza and Bagwell made. I don’t expect him to actually respond to that in any sort of direct fashion. His usual mode of operation is to appeal to his own personal authority and talk about how he’s wise about such things because his trade association and the Hall of Fame gave him his vote, and he was given his vote because he’s wise about such things. It’s vice-like, geometric logic.

All snark aside: While it would not shock me at all if any player who played between the 1980s and 2000s took PEDs — not one single player — Gomez has never once reported that Jeff Bagwell or Mike Piazza took PEDs, nor have any of his colleagues. He cannot or will not point to any “decisions” they made in this regard. Gomez suspects they did based on unreportable scuttlebutt. Scuttlebutt that may, in fact, be true, but scuttlebutt all the same. That is the basis of his opinion and his vote.

Which, good for him. But it’s something he is simply unwilling to admit for whatever reason.