For all of the back and forth and quibbling over each and every candidate, my guess is that there are only a couple of possible outcomes when today’s vote is announced: either Randy Johnson, Pedro Martinez, John Smoltz and Craig Biggio get elected, or just Johnson, Martinez and Smoltz. I think that’s the universe of possible outcomes.

This thinking is based mostly on what we’ve seen from publicly-released ballots thus far combined with some guesswork. My friend Repoz at Baseball Think Factory tracks them via his “HoF Ballot Gizmo” and compiles the results. This is what he has as of this morning: 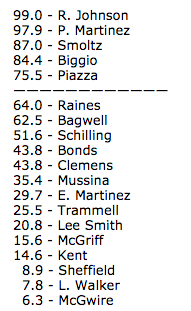 He’s been doing this for a few years, and he’s figured a few things out about it. The most relevant thing is that the totals in the Gizmo tend to overstate most players’ actual support, as the sample comes from people who are, for the most part, active baseball writers with online outlets at which to reveal their votes ahead of time. It does not capture the votes of the silent majority of voters — many who aren’t active baseball writers — who simply fill out their ballot and quietly send it in. The former group tends to skew “big Hall” and be a bit more open to advanced metrics and more forgiving of PED use than the latter group.

So, it’s safe to say that these numbers will fall anywhere from 3-6% in the final tally. I think that means Johnson, Martinez and Smoltz are safely in. It bodes pretty well for Biggio too, though many thought he’d make it over the line last year and didn’t. I think it means Piazza falls below the 75% threshold when the results actually matter.

If four guys make it in, it will be near-historic. Only twice have more than three candidates been elected to the Hall of Fame by the baseball writers in one shot. The first time was the inaugural class in 1936, featuring Babe Ruth, Ty Cobb and friends. The only other time came in 1955, when Joe DiMaggio, Gabby Hartnett, Dazzy Vance and Ted Lyons made it in.

Even three inductees would be a big deal. We saw that last year with Greg Maddux, Tom Glavine and Frank Thomas, but before that you’d have to go back to 1999 when George Brett, Nolan Ryan and Robin Yount were elected. Say what you want about the logjam on the ballot and a lot of worthy-players being overlooked, but in the aggregate, the voters are moving about as quickly as their weird and broken process allows them to move.

If I had to bet money, I’d bet money on three, though I am cautiously optimistic that we’ll see four elected: Johnson, Martinez, Smoltz and Biggio.