The Tigers were dealt a big blow last spring when their starting shortstop, Jose Iglesias, went down with fractures in both of his shins. He’s been rehabbing, however, and reports have been good. The latest report has him almost completely cleared for baseball:

“The only thing he hasn’t really done full bore is a sprint on a regular basis on hard ground,” [Tigers GM Dave] Dombrowski said . . . He’s running on a physical therapy treadmill designed to put less pressure on his feet.

“He’s running almost 100% on that,” Dombrowski said, saying he is where he needs to be without any pain. “All very encouraging,” he said. “They tell me he’ll be OK.”

In other news, that story is from Anthony Fenech at the Detroit Free Press. He’s the new regular Tigers beat guy. He’s young and he’s good and evidence of that can be seen by the fact that, when talking about Iglesias’ 2013 season, he casually-but-usefully drops Iglesias’ BAPIP:

Iglesias hit .303 during his rookie year in 2013, split between Detroit and Boston, but that mark was aided by a .356 average on balls in play.

These days most mainstream baseball writers are conversant with advanced stats. Yet either they or their editors still have this habit of treating them as some foreign thing that requires a separate conversation complete with extended definitions and prefaces giving readers a general overview of the sabermetric movement. Bill James is still often name-checked. It reminds me of when Taco Bell menus used to look like this: 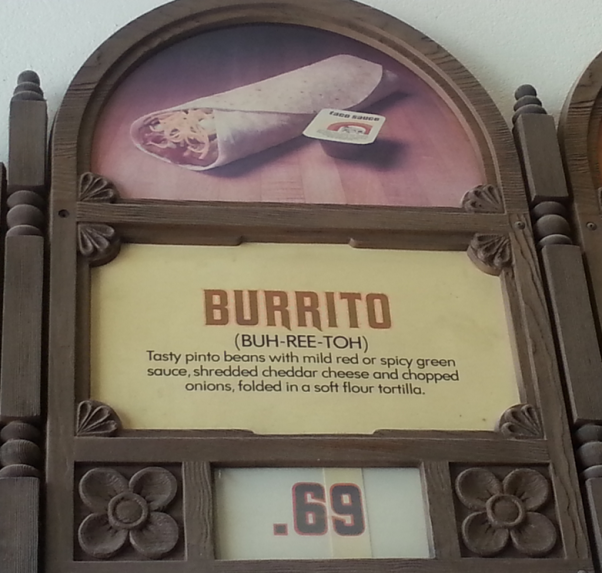 Maybe there was a need for this in the late 60s and early 70s when burritos were still sort of exotic to a lot American fast food eaters, but they stopped doing that at some point. Why? Because Taco Bell realized that we can handle a burrito. Yes, we ate nothing but cheeseburgers for years and we probably still understand cheeseburgers better, but by some time in the 1970s we were totally are capable of processing what a burrito was as long as it was presented properly (i.e. fast, cheap and available at, like, midnight).

Mainstream baseball writing (i.e. newspaper baseball writing) still hasn’t figured that out for the most part. It probably was necessary in 2002 to explain advanced metrics, such as they were then, in greater detail. Batting average and RBI were our cheeseburgers, and we were being asked to process something new.  But we’ve been eating our SABRburritos for a good while now, so it’s not necessary for them to be over-explained to us. It’s actually sort of distracting and creates unnecessary controversy when they are. WAR debates and “geeks vs. jocks” cultural garbage. I’m rather tired of that. Aren’t you rather tired of that?

The point of advanced stats is to help people understand baseball better. And while, yes, like any advances in any field, advanced baseball analysis lends itself to super-esoteric thinking and debate, only the academics really care about that. I’m glad they do care about it, because all of their thinking and arguing about it moves the ball forward and helps us learn stuff, but the vast majority of fans care no more about the details of that sort of analysis than they care about what’s going on in a test kitchen someplace.

Just like your average restaurant goers just want a good meal and appreciate a better one when they get it, regular baseball fans just want better information, preferably in context, preferably in a way that relates directly to the game as we consume it. Wanna signal to people that Iglesias may not really be a consistent .300+ hitter? Drop a quick, clear reference to his batting average on balls in play like Fenech did there, don’t do yet another feature article on “The Sabermetric Revoltuion,” complete with Bill James quotes, a “Moneyball” reference and a diplomatic handling of the stats vs. scouts divide, eventually getting to the point — gently given, as if the reader can’t handle non-cheeseburger stats — that perhaps Jose Iglesias will not be hitting .303 on the regular. To do so is distracting and risks losing the reader with crap they don’t care much about.

This is a small thing, but it’s an important thing.