There’s nothing going on in baseball this week, so just get used to the idea that I’m gonna post interesting stuff that has only the barest possible connection to baseball at all, thereby claiming at least a thread of a justification. If this bothers you, well, welcome to HardballTalk, newbies, because I do this pretty much every Christmas.

Here’s one: a really interesting article talking about one of the implications of normalizing U.S.-Cuban relations. Or, perhaps, an impediment to it: claims by U.S. corporations over assets that the Cuban government seized and nationalized after the revolution. Claims that add up to billions of dollars. While it seems like ancient history, there are people at, say, Coca-Cola, ITT and other companies who, for more than half a century, have kept track of the stuff that used to be theirs in Cuba and which they’d like to be paid for. The article talks about how complicated that is and speculates as to how that could be dealt with going forward. I love learning about stuff like this. Stuff that, in the day-to-day, most people never think about. Or at least I don’t.

OK, the small baseball connection, apart from the fact that we’ve been talking about the baseball implications of the Cuba stuff in the past week: reading this article made me inquire about whatever happened to the Havana Sugar Kings, which was the Triple-A affiliate of, appropriately enough, the Reds. Just a regular old International League team like all the others, just happening to play in Havana.

They actually played out the 1959 (i.e. post-revolution) season. They even won the whole dang International League that year, despite rowdy, gun-firing celebrations of the revolution causing their third base coach and shortstop to suffer flesh wounds. For real. While they were on the field one night. What a gas.

The Sugar Kings pulled up stakes the next year and, after some moving around, ended up in the Norfolk, Virginia area. They’re still there, as the Tides, Triple-A affiliate of the Baltimore Orioles. I wonder if they still have a claim on assets like Coca-Cola and ITT do. Like, say, a bucket of Double Bubble was expropriated or something and they want it back.

Or, maybe it’s possible that the owner of their parent club already settled such matters. 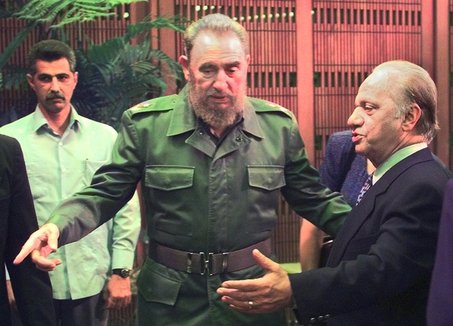