This is amazing. In 2014, people are still writing “won’t someone think of the children?!” articles. 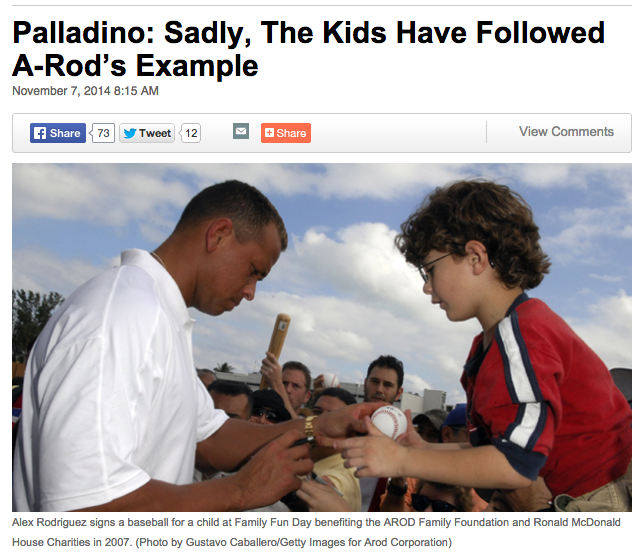 Note: that picture is from 2007. Which, yes, it sort of has to be given that no impressionable kid seriously looks up to Alex Rodriguez as the sort of role model this writer portrays him to be anymore. Why? Partially because most parents who like baseball and share it with their kids aren’t so messed up as to hold a guy like Rodriguez (or any ballplayer, if the parent is wise) up as a role model for their kids.

But mostly because kids aren’t idiots who look back to what is, for them, ancient history for sports role models.

A-Rod is 39-years-old. His last full, good season was in 2010. His last season when it could be fairly said that he was a big, big baseball star based on his on-the-field exploits was 2009, and even then he was tainted in the public eye. His last season as an actual, on-the-field superstar without serious controversy about him was 2007. He’s been famous forever, of course, but kids don’t read the papers and sports blogs like we do. If they pay attention to the game, they look to the big, exciting and mostly young superstars. They ask their parents “who is the best baseball player?” That sure as hell hasn’t been A-Rod for a while, and if you’re telling your kid that, cut it out.

My son is nine. He got mildly into baseball a couple of years ago, when A-Rod was an injured non-factor for the Yankees in the 2012 playoffs. He got a lot more into it this year. If you ask him who the big stars are, he says Yasiel Puig, Mike Trout, Clayton Kershaw, Andrew McCutchen and Aroldis Chapman. Why? Because he has either seen them play (a big factor for Puig, Kershaw an Chapman in his mind) or asked me who the best baseball players are. A-Rod won his last MVP when my son was still in diapers. He may as well be Tris Speaker to the boy. So, no, A-Rod is not doing anything to harm the children. Unless the children are reading the New York Daily News, and God, if that’s happening you have bigger problems.

Of course the biggest reason of all that this is a silly tack is evident from a simple read through. This writer’s argument is, literally and without irony, that “Rodriguez, Braun and all others who have failed to accept responsibility for injecting and ingesting PEDs have passed along that philosophy to impressionable youth.” He actually says “it’s a shame,” and claims that these baseball players have taught our children to lie:

It is the A-Rod Complex — a complete and total rejection of accountability. For every action there is no reaction except for denial.

Because no kid had ever claimed “I didn’t do it” in the face of obvious guilt until recently. That sort of thing was invented by Alex Rodriguez in the spring of 2009.

America’s sports writers: still failing to get a grip.

ST. PETERSBURG, Fla. — AL batting champion Luis Arraez won his arbitration case and will get a $6.1 million salary from the Miami Marlins, who acquired the All-Star infielder from the Minnesota Twins last month.

Miami argued for $5 million during a hearing before John Stout, Mark Burstein and Scott Buchheit. Arraez received a raise from $2.2 million.

Marlins pitcher Jesus Luzardo went to a hearing and asked for a raise from $715,000 to $2.45 million, while Miami proposed $2.1 million. The case was heard by Stout, Melinda Gordon and Richard Bloch, who were expected to issue their decision.

Luzardo also is eligible for free agency after the 2026 season.

Twenty-two players remain scheduled for hearings, to take place through Feb. 17. Among them, utilityman Dylan Moore and the Seattle Mariners have a pending three-year contract worth $8,875,000.