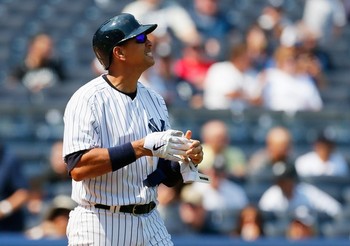 Buster Olney’s take on the latest A-Rod news starts off well enough. Unlike some of his peers, he does not act shocked and appalled at yesterday’s revelation that A-Rod told the truth to the DEA about his drug use. He merely recounts the past events in the saga, correctly noting that anyone with a brain wasn’t fooled by any of this.

As Ian O’Connor noted in his column Tuesday, Rodriguez had been making appearances on behalf of the Taylor Hooton Foundation — which is devoted to the fight against PED use — and speaking to kids about the dangers of steroids while simultaneously whispering out of the other side of his mouth to Anthony Bosch about how to best juice up and avoid detection. He used the integrity of the foundation, created after the death of the founders’ son, to burnish his image as the remorseful and rehabilitated A-Rod, and all the while he was taking drugs.

There is certainly no defense to A-Rod lying in general, and absolutely no defense to him lying in the course of charitable and youth outreach efforts. It’s profoundly scummy and cynical of him.

But let us not forget that A-Rod is not the only party who uses the Hooton Foundation to “burnish his image.” The entire relationship between it and Major League Baseball is a function of the league desperately seeking a way to get on the right side of the PED story back in the bad old days of the Mitchell Report. It became MLB’s go-to charity/shield, and that relationship is the very reason A-Rod was set up with it in the first place. To help with the p.r. fallout from back in 2009 when he first admitted to using drugs.

Again, that doesn’t excuse A-Rod’s behavior. But let us have no illusions that MLB’s relationship with the Hooton Foundation is not itself borne of calculation. And when the roots of a relationship are such, it is inevitable that, at some point, there will be fallout like this.

Olney also scolds A-Rod for putting the MLBPA and, specifically, its late director, Michael Weiner, through the pain and indignity of defending him. He is particularly mad that Weiner had to expend energy on this as his condition worsened, and says:

And then Rodriguez, apparently knowing that the union’s defense on his behalf was built on the sands of his lies, had the temerity to show up at Weiner’s funeral.

I’ll let the funeral bit go — people in baseball are really big fans of attendance or the lack thereof at people’s funerals as a gauge of character for some reason — but can we please dispose of the “A-Rod duped the union!” talking point?

Rodriguez’s “I didn’t do it defense” was laughable, but the union had both the right and the responsibility to defend him against the process by which he was punished and the severity of the punishment that was levied. Even if Rodriguez had said in January 2013 “Yep, I did a bunch of PEDs” the union should have and I have no doubt would have defended against a 211-game suspension that was based on, well, nothing other than Rob Manfred’s desire to make such a thing stick and to create precedent for future off-JDA punishment.

The MLBPA’s defense was certainly not helped by A-Rod in any real respect. Indeed, he made a mockery of the proceedings at times. But the idea that there was no defense but for A-Rod’s lies is simply wrong.

Finally, Olney goes back to something he’s been fond of arguing for years: the voiding of contracts of PED users. He argues that the Yankees should do so now:

But there is a higher ground for the Yankees and owner Hal Steinbrenner to take this.

A lot of teams in baseball, the Yankees among them, have long attached conduct clauses to their standard player contracts, in spite of the general perception within the industry that the language of the team clauses is superseded by the terms of the Collective Bargaining Agreement. That validity of the conduct clauses has never really been challenged; nobody knows for sure whether they are at all enforceable.

Could any team have a better opportunity to test-drive a conduct clause?

He goes on to say that the biggest justification for this is, more or less, that the Yankees will win over a lot of people if they look like they’re going hard after A-Rod because, you may have heard, he’s unpopular. And he’s calling Rodriguez cynical!

That aside, what, exactly, does Olney think should trigger a contract-voiding? It can’t be the revelation of PED use, because A-Rod has already been punished and has fully served his sentence for that. He must think that the argument should be that A-Rod lied about it publicly. Not under oath. Not in a way that broke any law. Just that he publicly, in comments to the press, lied about something.

Are we really cool with the idea that a player should have his contract voided for lying and the attendant bad P.R. that creates? Should a team void a contract for a player who claims that he is in the Best Shape of His Life but then pulls a hamstring in spring training? How about a guy who says his bad year was because he was tipping his pitches but it was really because he just can’t pitch anymore. Or, more realistically, how about voiding the contract of a player who hides an injury or tries to play through one without fully disclosing its severity to the team?

One can construct any manner of untruths that could lead to a contract-voiding if one puts one’s mind to it. People lie ALL THE TIME. Athletes maybe even more so, either because they have to deal with a pushy press corps or because part of the essence of being an athlete is convincing yourself of things that may not be so. Many players use that to motivate themselves.

Ultimately, the argument that Olney and others seeking the voiding of A-Rod’s contract are advancing is “This is a big, big story that looks bad and A-Rod is a big, big jerk, so the Yankees should get to keep the millions they promised him.” And I’m sorry, but that’s just not good enough.

The guy is a liar. The guy is a jerk. But the guy served his time. It’s time to let it go.