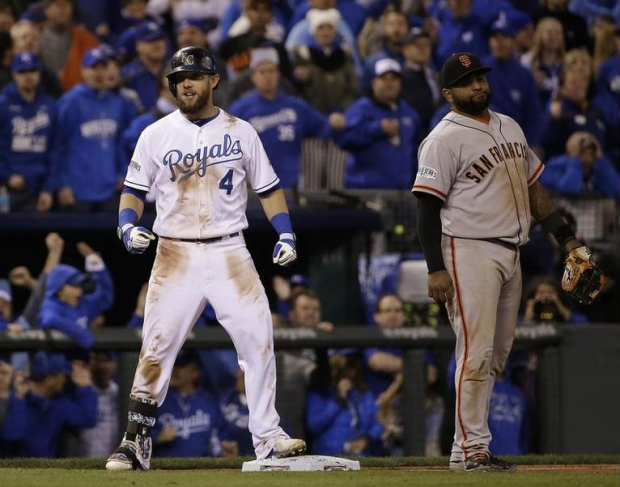 Nothing else is going on, and we’re all sort of over asking whether Alex Gordon should’ve kept running in the ninth inning of Game 7, so let’s throw this one out there. It’s a reader email from Mark M.:

I wonder if you’d write about whether Ned Yost should have called a straight steal of home in the 7th game, bottom of the ninth, after there was one strike on Salvador Perez. There are some factors that might improve the possibility of a successful steal:

Alex Gordon, on third, is a fast runner.

Madison Bumgarner is lefty, and would not see a potential steal as quickly as a righty would.

Salvador Perez bats right, and would shield the base-stealer from Buster Posey’s view, at least a little bit.

After one strike on Perez, it was likely that the Giants would continue to throw him high pitches (“up the ladder”), which must be caught and brought down to tag a sliding base-stealer.

A straight steal would be risky, but I wonder if there is enough info to assign a numerical probability, and compare it to Perez’s on-base percentage after he’s already got one strike.

I can’t assign probability because I’m a math moron, but the thought is interesting to me in the same way any hypothetical baseball thoughts are interesting, especially when the baseball is all over and all we have to talk about are player options. My gut: really damn low percentage move, and one that would be more likely to lead to someone getting fired than a bad send on the original hit may have, and we know that human beings are risk-averse animals for the most part.

I guess all I’d offer is that, if you’re gonna do it, maybe have Terrance Gore do it as a pinch runner. Or would that eliminate the element of surprise?

Man, I dunno. What do you all think?