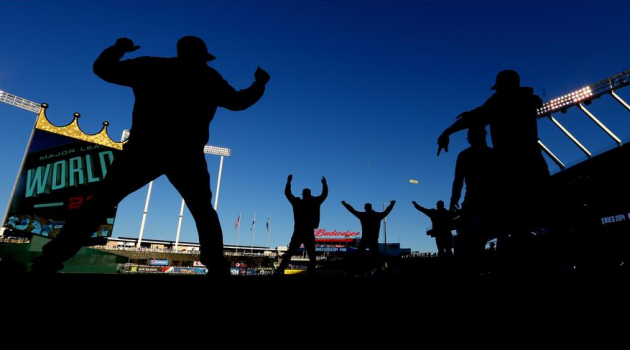 KANSAS CITY — Game 7 starts in less than an hour. Game 7 means everything in baseball. It’s the promise of a championship and a triumphant conclusion and 25 players going crazy as they spray champagne all over the place and celebrate the crowning achievement in the sport to which they’ve dedicated their lives.

Maybe I just woke up on the emo side of the bed this morning, but all day I’ve been sad that the baseball season is ending tonight, no matter what. The anticipation of Game 7 has been crowded out by feeling bummed that the posting of the lineups this afternoon was the last posting of the lineups until next year. That the batting practice I just watched was the last batting practice of the year. That, after tonight, I won’t have that running, almost unconscious monologue in my head between pitches in which I think about whether a fastball or an offspeed pitch is coming next. At least not until next spring.

Ultimately this probably comes down to my long-standing preference for the regular season to the postseason. The postseason is fantastic, of course. It’s what everything leads to. Baseball is a sport, sports are about winners and losers and the playoffs are the arbiter of that, obviously.

But, as I’ve noted in the past, baseball is The National Pastime, not The National Competition or The Main Event. It is a game which can and often does fade into the background over the course of months as opposed to demanding that we drop what we are doing and Take Notice. It is the soundtrack or score to the summer. The accompaniment which complements our days and nights, not something which demands that we block out those days and nights and refrain from other obligations. It is always there, not as a loud roar, but as a steady, comforting hum that maintains no matter what else is going on in our lives.

My love of baseball was sparked by baseball being played every day. Baseball kept me company when I was a kid in a strange new town with few friends. Baseball has been there for me for most of the bad things that have happened in my life and, for a few hours in the evening, allowed me to take my mind off them or to give me some time to chew on them while ostensibly doing something else. And when the game was over I had the next day to think about it and, the next evening, watch or listen to another game. A pleasant, everyday habit more than an obsession as such.

Baseball is a long, slow, steady build. It builds up to tonight, of course, But tomorrow it won’t be there. And for as exciting as tonight’s Game 7 may be — for as dramatic and history-making the events of the next few hours — it’ll over for months when the final out is made. And it’s hard not to have some seriously mixed feelings about that.