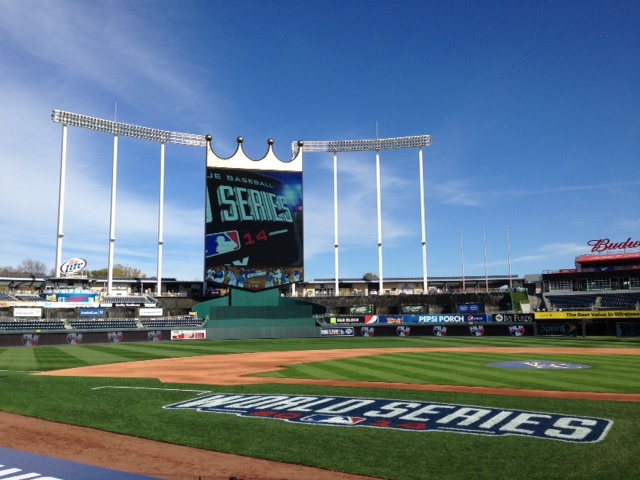 KANSAS CITY — File this under “deep thoughts,” but Kauffman Stadium is really cool.

I’d been here a couple of times before. My first experience was actually for a high school game back in 2003. I was driving across the country and when I passed through Kansas City the stadium lights were on. I was curious because I knew the Royals were out of town playing Cleveland that day, so I got off I-70 to check it out. You could walk right in for free and there were only a few hundred people watching the high schoolers. I sat behind home plate for a while. In the space of two innings I think there were, like, seven doubles hit because of the alleys. If you were a lazy scout just looking at box scores you may have overvalued what these kids were doing.

My major league experience here came in 2008, when I was in Kansas City for lawyer man business. I saw two games of a three-game series here. The Royals stunk — not a 100-loss team or anything, but not good — and it wasn’t hard to get good seats. I sweated like crazy and watched bad baseball, but bad baseball is better than good most anything else.

I can’t put my finger on what I like about this place so much. It’s out at a freeway exit, surrounded by parking lots, not in the middle of the city like so many of the best ballparks are. It’s got no dramatic sightlines. Beyond the outfield walls is I-70, some budget motels and a gas station. Indeed, the best view at Kauffman Stadium is INTO the place from I-70. It’s actually pretty dramatic, as the stadium is below the surrounding grade, so you can see lots of stuff. I wonder if there are a lot of fender benders out there during games.

What I think I like so much about it is that it’s not a ballpark. It’s a stadium. It is not trying to evoke the past. It is not trying to blend in with surrounding warehouses. It is unapologetically a building in which sports are supposed to be played. And it’s of a time — the 1970s — when no one shied away from poured concrete and modernism. That approach often resulted in ugly, messed up places in the form of bad multi-purpose stadiums. But with Kauffman, they just looked into what they thought was the future and forged ahead. Kauffman Stadium opened in 1973. By 1974 the country was fully in the grips of nostalgia and would not look so steadfastly forward again for a long time. If it ever would.

It helps that they have maintained the place and, though it regrettably used taxpayer dollars to do it, upgrade it as time has gone on. The fountains are expanded and the scoreboard is bigger, but it’s still the same place, more or less. It still has big tall light towers that aren’t supposed to look like smokestacks or something. It has blue seats because, dammit, that’s the team color, and why should they have green anyway? It’s sleek and swooping and, for the most part, no one has tried to hide all of the poured concrete.