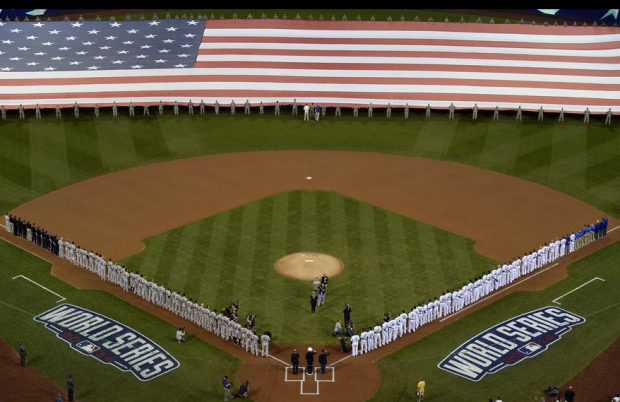 KANSAS CITY — We’ve touched on the idea of conspicuous patriotism and tributes to the soldiers before — ESPN’s Howard Bryant wrote an excellent article about it last year — but today we have a thought-provoking piece from a veteran, Rory Fanning, talking about tribute concerts and the public thanking of the troops at sporting events:

We use the term hero in part because it makes us feel good and in part because it shuts soldiers up (which, believe me, makes the rest of us feel better). Labeled as a hero, it’s also hard to think twice about putting your weapons down. Thank yous to heroes discourage dissent, which is one reason military bureaucrats feed off the term . . . Then you have Bruce Springsteen and Metallica telling them “thank you” for wearing that uniform, that they are heroes, that whatever it is they’re doing in distant lands while we go about our lives here isn’t an issue.  There is even the possibility that, one day, you, the veteran, might be ushered onto that stage during a concert or onto the field during a ballgame for a very public thank you. The conflicted soldier thinks twice.

Fanning makes the argument that by doing things like these, we necessarily give our approval to the country’s military policies of the past 13 years and stifle dissent. I think there is a lot of truth to that. But more broadly, I think the obligatory manner in which we have imported patriotism and honoring of the military into baseball has caused us to lose sight of the fact that — even if doing these things are good and admirable — when we make our patriotism mindless, we lose an essential part of it, which is thoughtfulness. And, yes, to Fanning’s point, when we make our acts of patriotism obligatory we take away another essential thing: the freedom of dissent.

I think we’ve reached that point in baseball. Major League Baseball’s charitable efforts, specifically for the Welcome Back Veterans and Wounded Warrior charities are admirable. And there is no question in my mind that they are well-intentioned. But, at times, one does feel the sense of formality and a sense of the obligatory with respect to all of this. And no small amount of corporate sponsorship is involved, in effect, allowing corporations to ride on the back of patriotic sentiment in an effort, intentionally or unintentionally, to bolster their own image.

Before Game 1, Major League Baseball issued a press release with the following pre-game agenda items. Remember: this is all just for Game 1:

It’s hard to take issue with any one of these efforts — why wouldn’t one want to do things to help wounded veterans? — but at what point did all of this cross over from admirable gesture to de riguer, corporate-sponsored events? For so long in our history, sports had been more or less apolitical. Or, at the very least, places where we could escape the politics of the day for a little while. Now it’s clearly a place where a certain type of nationalism and pro-military sentiment (which itself has practical political implications), however well-intentioned, is acceptable. And even expected.

I’m not sure what to do about this. I don’t want Major League Baseball to stop giving money and doing things for veterans and veterans charities, obviously. I like that we sing the National Anthem before sporting events. There is something nice about the blending of Americana and baseball. And, as is obvious from my writing over the past several years, I do not think baseball should be a politics-free zone.

But I wonder if, in our efforts to do good things, we have lost other good things. Or, at the very least, devalued good things by overdoing it and taking the thoughtfulness out of it. Difficult issues to be sure. And ones that, I do not think, will be tackled before we have our next round of warplane flyovers, tribute concerts and several hundred more renditions of “God Bless America.”