Oscar Taveras was 22. His girlfriend, Edilia Arvelo, was 18. Irrelevant of the young outfielder’s talent in the game that I love, the deaths of two people with seemingly so much time ahead of them is a loss for the world.

Yet, it’s hard not to think about that talent.

Taveras emerged as a top prospect when he hit .386/.444/.584 as a 19-year-old for low Single-A Quad Cities in 2011. He followed that up by hitting .321/.380/.572 with 23 homers and just 56 strikeouts in 477 at-bats for Double-A Springfield as one of the youngest players in the Texas League in 2012. After that season, he was universally regarded as one of the top three talents in the minors. He drew comparisons to many of the best left-handed hitters of the past, with even the name of Ted Williams being brought up.

Taveras didn’t start a single postseason game, though he still made an impression with his game-tying homer in the seventh inning of Game 2 of the NLCS. That turned out to be the Cardinals’ lone win over the Giants. Overall, he went 3-for-7 off the bench against the Nationals and Giants.

It’s crushing to think that if only the Cardinals had advanced to the World Series, Taveras would still be alive. He’d be coming off the bench and smiling and cheering on his teammates. He’d begin to emerge as a quality regular next year with one of the NL’s sweetest left-handed swings. He’d be an All-Star in 2016 on his way to hitting 25 homers. He’d lead the Cardinals back to the World Series, this time as their everyday left fielder and No. 3 hitter. He’d win a batting title. He’d win an MVP. He’d cap his Hall of Fame career by homering in his final game, just as he did in his very first.

That none of it will happen now is more than a loss for the Cardinals, a team that has suffered more than its share of tragedy. It’s a loss for everyone who loves baseball.

RIP, Oscar. As much as my thoughts are with your friends and family, I also so badly wanted to see what the future held in store for you. 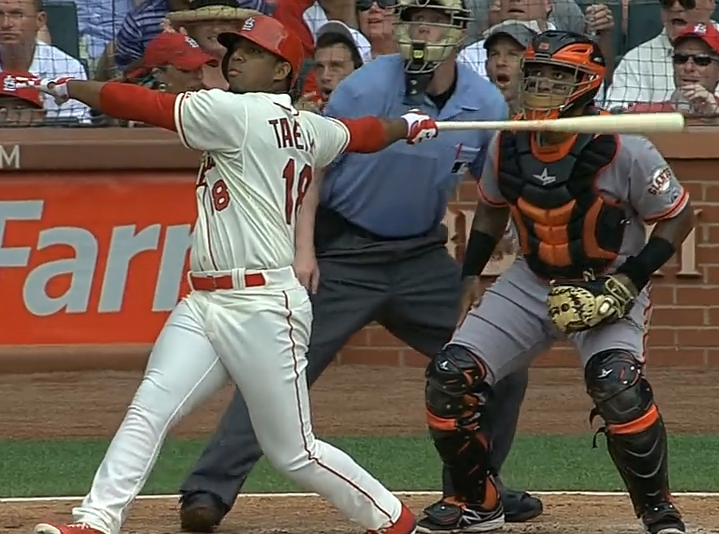