Yesterday I wrote about how, inevitably, someone would over-conclude regarding the Kansas City Royals. That they would not just merely laud them for winning or talk about how improbable and fantastic it is, but that they’d stretch to turn an 89-win team into Some New Paradigm or claim that they were not just winners, but that they were somehow better than we all think. To turn a neat story into an instructive narrative.

Of course, I said they’d do that if the Royals won the World Series. Seems I was overestimating people’s restraint: 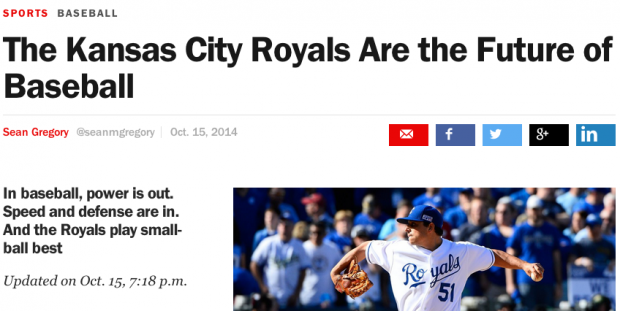 This was followed this morning by multiple columns from people about the Royals’ clear plan which suggest that this was all foreordained or, at the very least, that what they are doing now is the logical product of some overarching theory of the universe as opposed to a good run of baseball by a talented but by no means perfect team. What happens to these grand theories if the Royals don’t come back from a 7-3 deficit with six outs to go in the Wild Card Game? I guess they’re lost to history. Sad.

Baseball, apparently, can’t just happen on its own terms. It all has to be explained via extra-baseball terms. It all has to Mean Something. I wonder if what the Royals have done will still Mean Something if they get swept by the Giants. And if it doesn’t — if we aren’t still told to learn the lessons of these Kansas City Royals as if it were special wisdom — one has to ask how special all of this wisdom is now.