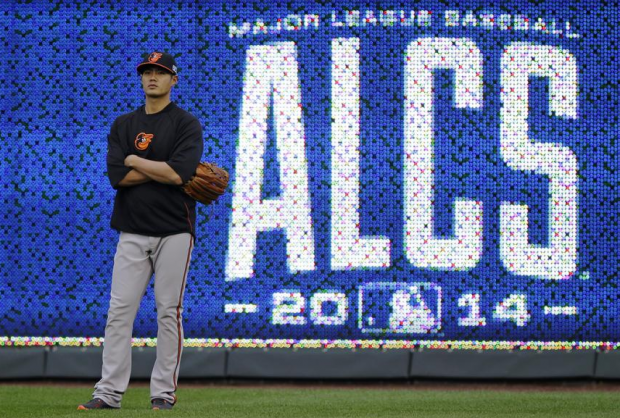 The Game: Baltimore Orioles vs. Kansas City Royals, American League Championship Series Game 3
The Time: 8:07 PM Eastern
The Place: Kauffman Stadium, Kansas City, Missouri
The Channel: TBS
The Starters: Wei-Yin Chen vs. Jeremy Guthrie
The Upshot: Talk about getting hot at the right time. The Royals have won all six of their playoff games so far and look like an October juggernaut and now they get three games at home. If they even need all three games. Fun fact, at least if you’re not an Orioles fan: In the 29 years since the League Championship Series was switched to a best of seven, no team that has dropped the first two games at home has come back to win the series. That has happened 11 times in the past. Also going against Baltimore: their starter, Wei-Yin Chen didn’t fare well in his only playoff start this year, giving up five runs in three and two-thirds innings ten days ago against the Tigers. Meanwhile, Royals starter Jeremy Guthrie could have some rust, not having pitched since his final start of the regular season back on September 26, when he threw seven shutout innings against the White Sox.