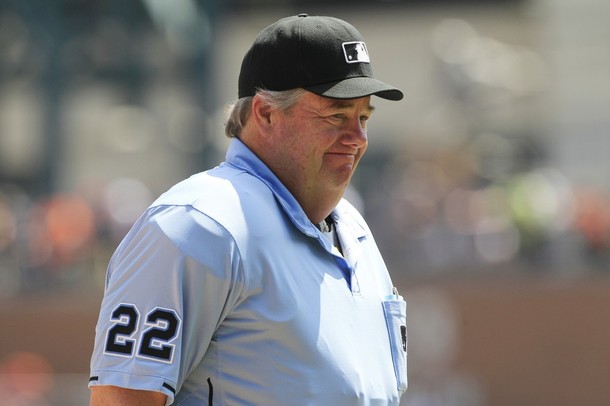 And I gotta tell ya, I’m thrilled as heck that I get to be the Crew Chief for this year’s ALCS. Joining me on my crew will be Brian Gorman, Marvin Hudson, Dan Iassogna, Ron Kulpa, Tim Timmons and Mark Wegner.

Over in the National League, my good friend Gerry Davis gets the nod as Chief. He’ll have Mark Carlson, Phil Cuzzi, Paul Emmel, Greg Gibson, Bill Miller and Bill Welke on his crew. Umpire Todd Tichenor will assist the designated Replay Officials at the MLB Replay Operations Center in the unlikely event we miss a call!

Now, I know what you’re thinking. “Hey Joe, why do you get be a crew chief at the LCS every year? Aren’t you . . . controversial?” Well yes, there have been some incidents over the years in which some disgruntled players and managers embarrassed themselves by questioning my authority. But for the most part those guys are sitting home or retired, so there’s no danger of them upstaging me as I bathe in the spotlight this fall. Just put your mind at ease about that.

As for the behind the scenes stuff, just put know that the umpire business is a meritocracy, probably, and that I was chosen because I was the best. Let’s see here in this press release . . . I’m sure it says something about how I’ve consistently graded out as one of the top umpires in all of baseball!

West, who leads all active umpires in years of service . . .

[crumples up paper, chews it and swallows it directly in front of you]

See! Country Joe is the best in the business!