Mariners 2, Athletics 1: Felix Hernandez allowed one run over eight to beat Jon Lester who allowed two runs over eight. This is exactly why the A’s — and everyone else for that matter — wants to avoid the wild card. Because there’s a chance the M’s will have the other one and your whole season will depend on outdueling Felix Hernandez.

Braves 7, Phillies 4: I’d say the Braves scored a week’s worth of runs here, but that may be generous given the week they’ve had. But hey, who am I to be pessimistic? Oh, wait, that’s exactly who I am to be pessimistic. Just so you know, though: I’ve been this way about this team since the Reagan Administration, so if they somehow win the wild card and actually go someplace in the playoffs, I fully reserve the right to immediately get excited and confident and stuff. Then when they crap out, I get to act like it was inevitable. As a Braves fan, this is our way.

Cardinals 1, Pirates 0: St. Louis won on a ninth inning walkoff single from Peter Bourjos. It was against Mark Melancon, who Clint Hurdle went to (a) on the road in a a tie game; and (b) stretched for two innings. Which I think is fantastic and I wish more managers would do. Can’t blame Hurdle for the strategy. But it is, unfortunately, a strategy that managers rarely if ever use these days, which suggests Hurdle was a bit desperate to get the win in order to avoid the sweep. Or maybe he’s not desperate. Because this sounds like a man who has his priorities straight:

We’re not going to back down. We’ll take the day off. We’re going to catch our breath and try and set some stakes down in Chicago.”

I have to assume that was intended by Hurdle to be “steaks” and not “stakes.” And if it was “steaks,” he’s my kind of manager. Hope you had a nice time last night, guys.

Yankees 5, Red Sox 1: Brian McCann with the big night: three singles, a homer and three driven in. Random from the game story: the Sox and Yankees are the two lowest scoring teams in the AL. I wonder what the betting line on that would’ve been back in March.

Nationals 8, Dodgers 5: A wild one. And not just because of this guy: 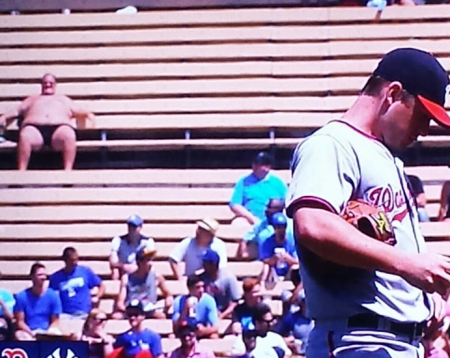 A fourteen inning affair that saw the Nats plate three in the top of the ninth, the Dodgers tie it up in the bottom of the ninth on an error, a two-run Carl Crawford homer in the bottom of the 12th to keep the Dodgers alive, and then a 14th-inning rally to give the Nats the game. Adam LaRoche drove in five after entering the game as a pinch hitter in the ninth, for cryin’ out loud. Someone go check on my friend in the black shorts there, though. I’m worried that he couldn’t handle this kind of game.

Orioles 6, Reds 0: Miguel Gonzalez with the four-hitter for his first career shutout. Yesterday my girlfriend randomly noticed that she was getting all kinds of email offers for late season Reds tickets. There’s a reason for that.

Rockies 9, Giants 2: Two homers for Chris Dickerson and Nolan Arenado hit a go-ahead, three-run homer in the fifth. Despite the Rockies’ crap year and the Giants recent rebound, Colorado takes the season series from San Francisco, 10-9.

Indians 7, Tigers 0: Danny Salazar with an eight-hit shutout in which he struck out nine and didn’t walk a batter. This on the heels of his five scoreless innings against Kansas City last week and a three in his start against the Astros before that. Justin Verlander, however, struggled into the seventh and ultimately ran out of gas.

Mets 4, Marlins 3: Matt den Dekker had three hits, including a bunt single in the eighth, after which he came around to score the go-ahead run on Travis d’Arnaud’s double. Giancarlo Stanton homered for the third straight game.

Blue Jays 7, Rays 4: Homers from Dioner Navarro and Edwin Encarnacion and a 4 for 5 day from Adam Lind helped the Jays win this one, ensuring their first series win at Tampa Bay since April 2007.

Cubs 6, Brewers 2: Jorge Soler had a two-run double and now has ten RBI in his first seven games. The Cubs sweep the reeling Brewers. They now sport a mere half-game lead over Atlanta for the second wild card.

Royals 4, Rangers 1: Alex Gordon hit a two-run homer and Jason Vargas shut the Rangers out for six and two-thirds. The sweep. I know Dallas always basically stops paying attention to the Rangers in August and September in favor of the Cowboys — and, heck, probably does so to some extent even in the middle of the summer — but I have to imagine that is more pronounced this year than ever.

Diamondbacks 6, Padres 1: Daniel Hudson made his first big league appearance since June 26, 2012, tossing a shutout inning. Two Tommy John surgeries later and the guy who showed so much promise is back. Here’s hoping that elbow stays healthy. And how about this quote:

“Even if I go out tomorrow and it blows again, it was all worth it,” he said. “It was a long time coming. Thankfully today came.”

Twins 11, White Sox 4: Kennys Vargas homered for the second consecutive game and drove in three runs. It’s been a bleak year in Minnesota, but Vargas’ .319/.340/.511 line since being called up is promising.

Astros 4, Angels 1: Chris Carter socked two homers and drove in three. He has 35 on the year — one behind Nelson Cruz and Giancarlo Stanton for the major league lead — and has 22 homers and 52 RBIs since July 1. Not too shabby.